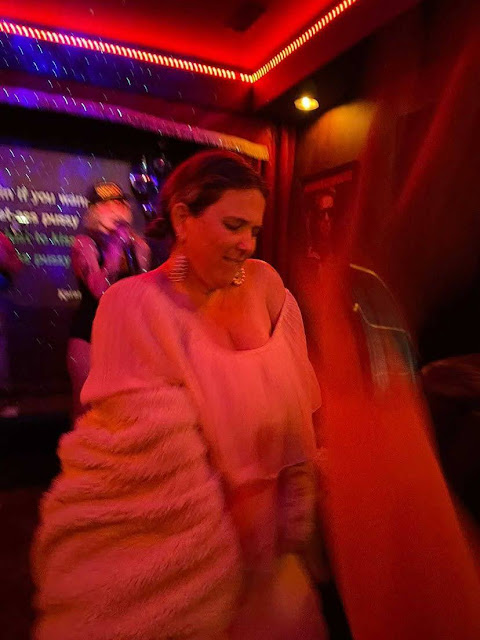 I woke Anson up around 6:30 this morning to watch the Blue Origin space shuttle launch with me. He didn't know I was going to do this. I didn't know I was going to do it either. I woke up and saw it was almost launch time and CK was downstairs leading his men's mid-life yoga group and so I gently woke up Anson and climbed into his teenage boy bed (an equally brave move, I'll have you know Jeff Bezos) and we watched through blurred and new morning eyes.

Anson lasted through the launch but rolled over and grabbed another hour of sleep before the booster ever returned back to its pad. I sat there watching the entire 10 minutes plus, mostly astonished at how it looked like a movie. Like it was all staged. How could this be real life? It was Ray Bradbury--the richest man in the world goes up into space in a penis-shaped contraption and emerges wearing a cowboy hat? It's weird right?

This is life now I guess. Everything is so weird. What are we doing?

I ask myself that so so much.

What is going on?

What are we doing?

One time when I was a teenager I was dancing to this Black Crows song in our family room and I was feeling it so much. So much. My hips were swaying to that southern rock. So much. And my eyes were closed and I was feeling every twang and every strum and I dropped to the floor on my knees and I let my torso flip around like it was a flag during a storm and all-of-a-sudden, my mom was there and she caught my face in her hands and she looked at me with inexplicable intensity, and everything stopped.

"What are you doing?" she demanded.

And I didn't know. But wasn't that the point?

I was doing something and that something was wild and brave. Even if it was just in my family room. It was being alive.

So I guess that's what we're doing--we're living.

It's better than doing nothing.

And honestly, some people are so good at living.

And some people are zombies.

And I know how that feels too.