My Frown Is My Crown 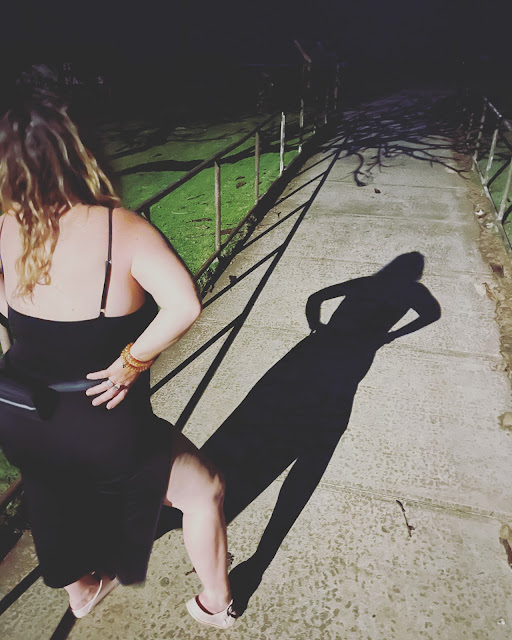 One consistent message I received from my community growing up is the binary of emotions being good or bad. Happy is good, anger is bad. Smiling is good, frowning is bad. Shadow emotions were often bundled up with ingratitude, selfishness and well, Satan.

I can see now that these "negative" emotions are in actuality truth-telling. I've said before that anger to me feels like intuition trapped. If you can shame people for feeling these natural-occurring explosive gusts, you can control their entire lives. They will never ask themselves important questions, they will never hear the imperative answers. No one grows up. Everyone stays in an arrested state of child-like submission. True adults--embodied and intentional--are rare and precious in my world.

Still I find myself second-guessing my need to express anger, frustration, sadness, regret etc. What do I want from it? But I know this answer--I want clearing, and clarity. These emotions, when not expressed, harden over time and fall into a pile like rocks in my stomach. Their weight feels physical and their pain is real. From early childhood I was plagued by the sensation of stomach cramps and panic pains that rocked me and left me constantly wondering if I needed to repent of something. God was not happy with me and these stomach aches were a sign of sin. It's like "prosperity gospel" but maybe I'd call it "physicality gospel" because I believed being physically fit meant I was good with God.

After nearly a year of stomach aches starting in April last year I finally got myself to the doctor office in January for a check-up. I knew the pain was stress-related and I also knew I was trying to control it with a post-Mormon style of apology and repentance--not about sin per se, but about health or eating or a lack of quality spirituality in my life. If I eat a perfect diet, if I exercise for an hour daily instead of 45 minutes, if I meditate with more sincerity...

It turned out that the NP on call that day was a childhood friend. I lifted my mask for a brief second to confirm that it was really me sitting on that cold examination room holding her stomach with one hand.

"Courtney," she said to me with compassion, "you have been through so much this year. No wonder you're having stomach pains. Tell me everything."

But all I could think in that moment was that it had been a horrid traumatizing year for almost everyone I knew. So I should...look for the positive right? Name things I could be grateful for! Turn this gigantic frown UP-THE-FUCK-SIDE DOWN!

But she wouldn't have it, "I am sitting here until I hear it all." She planted herself onto a stool with wheels and scooted closer until she was directly in front of me. Her blue medical mask obscured everything but her eyes and her eyes were intense on mine. No bullshit, they said.

"Let's start with you losing Topher," she prompted.

But it started earlier than that. First in March with some heavy friendship problems which felt like a major break-up from a community I loved. Then the pandemic hit and by April I was (like so many other parents) suddenly scrambling to manage the educational upheaval of four kids in elementary school with technology that worked only 35% of the time. Christopher was in the deep throes of a start-up company which required his body in a desk downstairs on an intense hunt for funding. But yes, then the loss of Topher in June which was expected after years of his ALS diagnosis but still felt incredibly sudden. The night we said good bye to him as he lived his last few hours plays in a loop in my mind. The grief from that could barely register before the morning in September when Annie--one of my closest friends--texted our group chat early in the morning.

"I am sorry to tell you guys this, I have stage four pancreatic cancer."

She would live until mid-December. But before Annie's death, November took one of my favorite humans I had ever known, Jen Galan, who also passed away from cancer. She had been sick for a year, but her death had never felt eminent to me. She wasn't the type of person to die. I read our most recent texts over and over again the night I found out she had passed. It had only been a few weeks earlier that she had slid into my DMs to make me laugh mostly by teasing me--my love language.

I can't stand to lose funny people. Or artists, like Annie, who had transformed so much of how I saw the world. I've said this before and I believe it completely, Annie wasn't just a friendship, she was a lifestyle. Her presence in my life was intense and consuming. Sometimes that meant I had to take breaks from our daily interactions--she was that powerful to me.

Then in January we got word that Christopher's start-up was losing funding. We had three weeks to figure out a new employment situation (still trying to figure that out...) all of this sprinkled with a family divorce, marital separation of two close friends, finding a massive Trump flag proudly flying in front parent's home in October, and Iris' broken leg (which now seems a bit charming comparatively).

In the doctors office I stopped talking for a minute, feeling as though I was giving an acceptance speech-- panicking that I was forgetting to mention some other significant trauma. Oh yes, the capitol riots, George Floyd death and subsequent protests, the sudden death of two men I called friends--one whom I had marched with at our local Black Lives Matter demonstration just weeks before he passed. And oh yes, finding that one of my closest childhood friends was on the other side of that demonstration, marching alongside the white supremacists. Recalling that image is like cutting open my skin all along my entire stomach. So painful.

"It feels like I have a backlog of grief," I told my friend who handed me a box of tissues. "You can hand these to me, but I physically cannot cry. I feel like I keep borrowing credit to stay alive and now I owe so much in grief debt I will never ever catch up. I am utterly numb. Except the stomach pain. That's about all I can feel right now."

(Someday I will write about how the discovering and using of psychedelic mushrooms became the only spaces where I could feel my feelings this past year. I have a deep conviction of their ability to crack open the hardest places of our existence and heal what hurts.)

When I was done my friend looked at me like I had solved my own problem. "Looks like you could use some medication to help you get back to functioning." I took her prescription and used an SSRI for a few months until I could get through the worst of it. In that space I wrote a new contract to myself--I will feel feelings by writing, walking, dancing and talking with my beloved, generous friends. I will not feel shame for eating when I need comfort, nor checking out when I am overstimulated. I will slow my life down to a pace where I can feel my heart beating. I will take help that is offered to me. I will go on breaks and trips when opportunities arise. I will keep my boundaries with people simple and solid. This is the work I am doing right now, and it is enough.

"It's been a year since the pandemic and I feel like I am a bigger mess on the other side," I said to Christopher last night. "More than ever the line between sanity and insanity seems indecipherably thin."

He wasn't convinced, "I don't think you've ever been so alive." And maybe he's right, if being alive means feeling everything without the shame. It reminds me of my kids who seem to swing from emotion to emotion like chimps on trees limbs. This minute they are ecstatic, the next devastated, then pleased, the next--swoosh--not pleased at all. Their recovery time from one to the next is surprisingly quick.

Being alive does feel like insanity when you've been manipulated to live only in the places that make your community comfortable. This is certainly because an embodied adult is threatening to those who believe their existence is to please the patriarchy. It's absolutely nuts to me that we handed over our very emotions to a church that kept them locked up at their own pleasure. They taught us this from childhood--to turn our anger and frustrations upside down and smile them away. Anger does not make a cult look good. But smiles...that's the shit!

There are times when I catch my 44 year old face in a reflection and note the wrinkles forming around my lips. Do I look I am always frowning I ask? God, not a frown! ANYTHING BUT A FROWN. And sometimes when I feel brave I make myself look again--it's not a frown, it's my face.

And that's all there is to it.