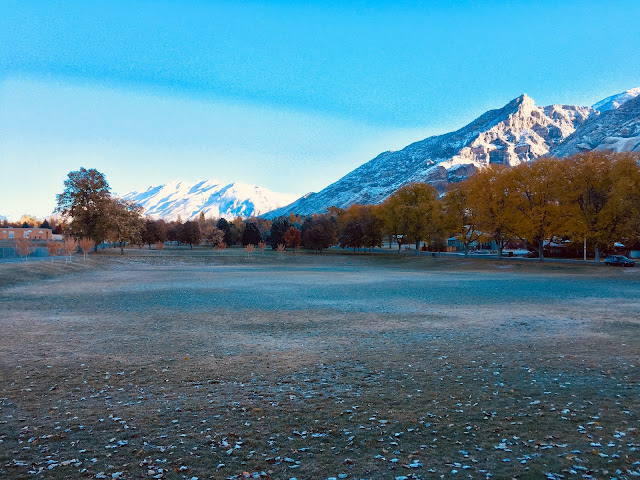 From Toni Morrison, "At some point in life, the world's beauty becomes enough. You don't need to photograph, paint or even remember it. It is enough."

It seems like I've written this essay one hundred times-but it keeps being asked to be written.

This morning I went for a walk in the park. Strolling down the lane, birch leaves in their golden costumes commanded my attention. I noticed them departing from their previous attachments dancing wildly to the ground. I knew the leaves had waited all their short organic lives for this one great performance. And I, the lone audience member, the sole witness, was wonderfully impressed. I wrote a rave review in my heart.

There were kids on the playground shooting hoops in the icy air. I noticed their puffs of breath coming out of their hoodies like little bipedal dragons. Did I send my kids off this morning with enough warmth? I worried. I worry so much about what my kids are wearing. I am not thrilled about this. I want them to be confident, comfortable, warm/cool, stylish, mobile, practical. I don't want their clothes to interfere with their ability to learn and make friends. I know this worry is just my projections--clothes are my first and most important language, but also my greatest distraction and torment. And it's clear my kids are inhaling my worries like it's part of the air in our house.

So that's something that occupies the pie chart in my head.

When I turned the corner at the southern point in the park, I was jolted by a view of immediate dusty silvery peaks displayed in the morning sky beyond the trees. Mount Timpanogos was veiled in white--and to the east were her mountainous bridesmaids marching along peak to peak. I sometimes think of Timpanogos in the north is the mother of our valley, and to the south, beyond the lake, is our father Mount Nebo. She is exquisite, and he is massive, and between them both lies a valley of streams, rivers, canyons, rocks, and a wild marriage of natural history--including a irreconcilable fault line, and an ancient sea. Also, us humans: first the natives who set up their lives in pit houses along the Provo River, the white people whose history in this valley must be anatomized and settled, and the migrants who come and go and sometimes stay (to their surprise).

I grew up watching students from the university set up easels outside my front door, hoping to paint the peaks with watercolors or acrylics. Those mountains were nothing but home to me, like a familiar wallpaper lining the halls of our home. It wasn't until I was leaving on my Mormon mission I came to see their grandeur. They were saying good bye to me, I knew it in a spiritual way. I was aware of how much they were a part of me, and how much I was going to miss them. And years later, the morning I had given birth to my Ever Jane at home, I stared out the window from the quiet basement bedroom where we were recovering, they peeked in and congratulated me--us--the newest human to live under their rocky spell.

This morning I tried to take a photograph. It was useless. It said nothing about what I saw. It did not convey the northern bride or her trail of maidens each slightly illuminated by the morning sun. It could not capture the birch trees tossing leafy confetti to the ground, nor their gowns of vivid yellow. It didn't say anything of my desire to leave it healthy for my little hooded dragons so they can puff out clean air and live here forever, if they choose.

It is curious how in learning to consume, we lost the skill to witness. And when I think of it, the cure for just about everything is a double dosing of observation and awareness. Seeing is healing.

The beauty is enough because it is all-consuming.

I am starting to understand.