Up Against a Wall 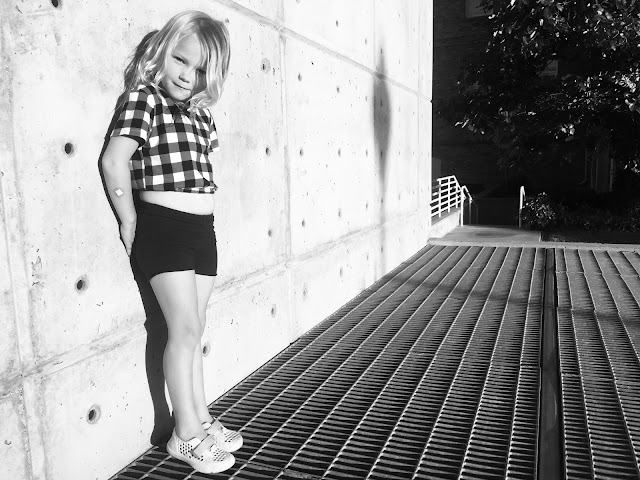 I am not saying it's a great habit to have but I've been falling asleep to tv most nights. This is another reason why I needed to move out of my former room (see previous post...I mean, if you want to). I have fantasies of falling asleep after meditating and reading poetry. But most night it's more like I laugh myself to sleep watching Tony Hale on Veep. Julia Louis-Dreyfus on that show is a gift to humanity that we simply do not deserve.

Last week I watched several of David Letterman's Netflix special, My Next Guest Needs No Introduction (also mentioned on previous post that you may or may not be interested in reading sometime but only if you want to). I was particularly excited to watch Tiffany Haddish because she is a truth teller and a former party queen and those are two things I admire more than most qualities. I was also interested in hearing from Melinda Gates, particularly her work on gender pay gaps and parity around the world.

It's a rare occurrence when one of the world's richest women advocates for estate tax and wealth distribution--acknowledging that her ability to gain wealth happened because of the greater democratic system. She also talks about (SPOILER ALERT) her role as the head of a foundation is to flesh out global problems and present them to governments to create new systems and opportunities. I cannot argue with the flow chart that starts with wealthy people establishing organizations to solve problems, using their wealth to eradicate disease for example, and continues onto the strengthening of governments so that they can become sources of support and aid to their people.

(Is this like that thing where people recount an entire podcast to you after they recommend you listen to it? Like, why should I listen now? You just told me the entire thing. And with less sound effects and no breaks and absolutely no intermittent tunes may I add?)

Anyway, I was particularly interested in the part of the interview where Dave asks Melinda about getting a call from the Pope. She explains that in her global work she discovered early on that the key to women's financial success  and overall health was birth control. So she went all out on birth control accessibility, especially in countries where birth control is considered an act of rebellion (which is every country where patriarchal systems still exist!) "I am a devout Catholic," she explains "but on this matter I went against my church." Can you imagine being so wealthy that you can say "Nah man, I'm good" to the Pope? That's when you know you're top bitch.

I thought about that section of the interview all weekend. When I was a practicing Mormon experiencing the same sort of dissonance from my church I entertained the thought that I could be a game changer in my church. I could be a voice that advocated for progression inside the walls of the structure. I was going to "help from the inside." But it didn't take long for me to realize that it's akin to throwing myself repeatedly up against a brick wall--the wall stands resolute, unscathed, but every single interaction left me bloodied and bruised. At the risk of losing my own mind I surrendered and left. Now that brick wall--covered in my blood and claws--stands as a testament to its ability to ward off human suffering.

This weekend I also watch Wanda Sykes Netflix special. Have you seen that? Well first of all she talks about Trump. (JK I am not going to recount her entire routine but you definitely should watch it!). But there is a part where she beckons feminists everywhere to stop watching The Bachelor. She explains that we can't on one hand be saying #metoo and #timesup but then support entertainment (or otherwise) that make women look stupid. Or encourage them to be stupid for ratings. DON'T DO IT she orders the audience.

I understand that it can be argued, "but God wants me at church" to which I sincerely don't know what to say. It's your Godly revelation, I get it. But to be sure, bias confirmation is a bitch and not top bitch like Melinda Gates, you know what I'm saying? But also what are we afraid of? That God will smite us with a curse for not supporting a system that hurts people? With scabies? Or maybe we think we will miss out on an opportunity to serve? To which I say, that's the problem with churches, they make you think they're the only charity in town. And back to scabies, who wants to deal with a God like that?

I do wonder how much of an impact Melinda would've made if she had said, "When the Pope called me I told him I could no longer support the church with my money or time until they decide to fully recognize that being a Christian means have a mind centered on equity for all." Thank you Supreme Pontiff, good day. You know? No judgement on her of course, but I do question how big of an outcome we can expect when women won't stop showing up? Especially women who have privilege to provide coverage for others for whom leaving makes them vulnerable (I know there are many, many reasons).

Incidentally, I have seen bricks from the wall crumble in my lifetime. And in my opinion it's because there are less people to repair them as soon as they show cracks. Cracks are there because the wall is not aging well. Less people fixing the brick wall means the wall can tumble and better things can be rebuilt.

Good day to all the Supreme Pontiffs out there.