Pics or It Didn't Happenish 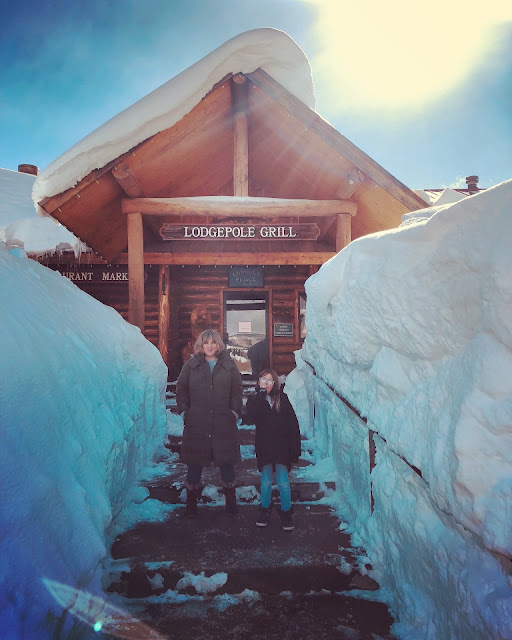 Last night after a day with our kids, piles of snow, bluebird skies and a delicious lunch of housemade chili, CK and I had the same discussion we've been having for the past ten years.

"I need to quit social media," I always start the same way.

"Ok why?" he always responds.

"Because it's an escape. Because it causes me to be on my phone more than I want to be. Because it blurs the lines between my genuine desire to celebrate life and my ego-driven desire to be relevant in my world. Because I am not very good at it and I don't have the intuition right now to improve. Because the more I use it the less I write, and I all I really ever want to do is write."

"And you've been saying this for years, so maybe it's time to think about why you haven't quit yet."

The longer I am married to him, the more I appreciate CK's introspection and guidance. He's a natural life coach with an abundance of  honest support. I never feel like he guides our conversation towards his own ambitions. He just genuinely wants to help me come to my own peaceful resolution, whatever that might be.

"I haven't quit because life is lonely, and connection to people--online or otherwise is helpful. Because social media has introduced me to people I love, and friends all over the world with ideas that have lead to positive changes in my life. Because it educates me. Because it helps me feel like my life isn't just a minuscule drop in the bucket of the history of humankind. It gives me a sense of legacy."

"Is leaving a legacy the most important thing you?" CK followed up.

I have thought for a long time that it was. I remember Lin Manuel Miranda in an interview talking about writing the musical Hamilton and how all of Hamilton's choices were legacy-driven. His obsession with writing, his political activism, his children, his marriage, and his self-detrimental desire to clear his name at all costs. I get all of this on a very evolutionary level.

But I have also come to the resolution that I will live now, and in a few generations I will be forgotten and in a hundred years (given we make it past the inevitable destruction of climate change) much of the people, customs and culture we obsess with now will also be forgotten. So a legacy isn't really priority, not like it used to be.

"It's power, " I aha-ed. "I worry about the loss of the one market I feel I own a little slice of power."

All my life I've watched women in their powerlessness. I saw women tricked into believing they had power which was actually platitudes. I witnessed women claiming power that was really just perception. And daily I see women grabbing for what they think is authority but is really privilege, or worse, disguised tokenism.

Women holding rocks that turn to clay, dust and blow away in their hands. I've seen it. I see it.

But having social power means you have a platform that can equally act as a shield, sword and a megaphone. It's the second best thing to economic power, in my opinion. And if you weren't raised to be an economic contributor, and your religion doesn't allow for viable female religious power, at least you can hope for a slice of social media--the power to influence and gain fame and maybe, after all money. In this realm, sometimes women can even get their religious leaders to give them a slight nod for the free advertising they might generate from showing up in marketable ways.

The power social media provides me is a validation for voice, which I believe is important to me in particular because I have that familiar maternal need to ensure my children inherit a more just world. Adding my voice to the army of marginalized people is important to me. It's not going to win me over a lot of followers or readers, but it gives me access to a channel of peace that runs through my values and ideals. That said, I think less of privileged voices the internet makes more space for others who haven't had access to any power like I have, and I am ok sitting Twitter and Facebook out. Not like there's infinite space on media channels, and for that reason, I could also use my own space to amplify others. I get all this. I try earnestly to do this. Why am I still wanting to quit social media every day of  my life?

Last year I suspended my Instagram account and honestly I found myself missing the visual validation more than anything. I grew hungry to be seen. I don't know where to even start with that whole discovery, but I am trying hard not to ascribe shame to it and spiral. For certain, my ability to feel good about myself was greatly enhanced in the six months I didn't show up in that visual space. So why did I return? My own validation wasn't enough, I guess.

I want someone to assure me event though I am not bringing in a paycheck, not religiously active, and reduce/suspend/quit my presence social media, I will still have power somewhere in my life. (And not as a mother, because I don't want to ever confuse power with parenting. As a parent I try hard (and fail mostly) to make the our daily domestic exchange about experimentation and learning. Or, as I've heard it, an experience of productive family-sponsored socialism. My control issues plague me, but I haven't given up yet.)

That was something CK couldn't promise,  "I don't know if you will have power, or if you will feel powerful if you stop engaging on social media." Which an important distinction given my experience as a girl growing up in a patriarchal culture--was feeling powerful the same as having it? (Of course not, abuse still leaves a mark even if it's disguised as a benevolent gesture.)

This reminds me of the recent episode of Broad City--Ilana and Abbi experience a triple rainbow at the end of an epic day in NYC, and because they don't have access to their phones they question if they're really experiencing what their eyes are seeing. Was it enough to just experience it and not document it? (This post is far too serious to just drop Broad City in it, but HERE WE ARE).

I know this sounds crazy, but I find myself seriously asking the universe if social media created a new way of existence? Does reality care less than ever before? Also, is this the most overly-discussed, tired and useless conversation in universe? Probably.

I came to age in a time when the phrase "pics or it didn't happen" quite literally became the reality of many of our lives. Last night I was retweeted on Twitter by one of my favorite actors, and recent SNL host, Don Cheadle. The minute it happened I took a screen shot and sent it to my brother Topher with the text, "I don't know anyone in my life who would appreciate this retweet like you would." 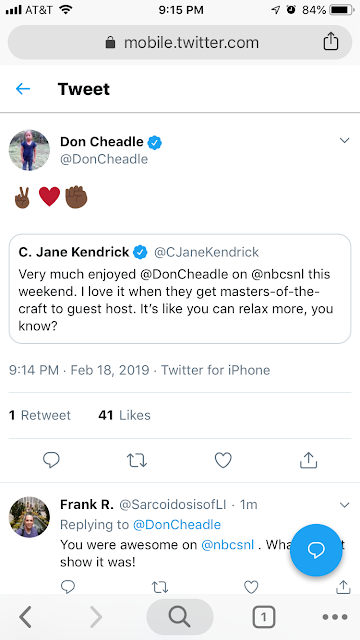 My brother replied with a brotherly kudos text.

"He really was so great."

But this is what makes me come back time and time again--a need to feel like I have the ability to contribute to a local, national or even global conversation. Or a visual input. If I don't live with a trail of Instagram pics behind me, did I REALLY live? If I baked a perfect coffee cake in my oven did it fully exist on all dimensions if I didn't take a picture and document it?

Just in case, here's a pic. 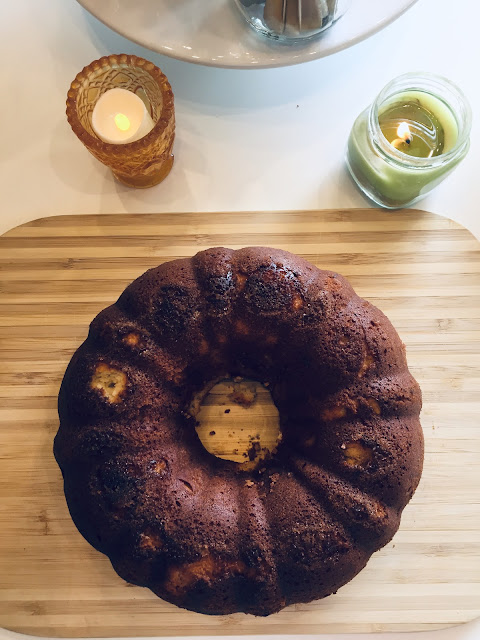 It truly was delicious. A thin layer of cinnamon and sugar waiting to be discover right through the middle section. Super proud. 1,700,000 likes!