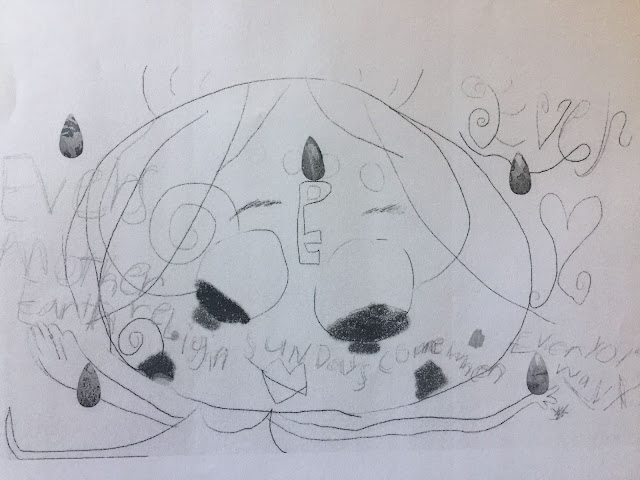 I have been inundated with kindness and support for my last post. I am so grateful. Sure there have been mean comments here and there, but I understand I wrote a bra burner (ha! perfect!) and some feelings were going to get hurt. That's the chance you take I suppose.

But I don't ever want to come across as NBD about writing your truth. I really want to be honest about it. It sucks. And I think you only do it when the poison inside of you is making you so sick that there is absolutely no other way but to regurgitate. As Maya Angelou says, "There is no agony like bearing an untold story inside of you."

And so those supportive comments mean the world to you.

Somewhere in the middle of all that has gone on the last few weeks I got a message from an extended family member who told me I need to stop talking because I was embarrassing her. Again, I don't know exactly what it was (there are so many possibilities!) but she told me that I was disappointing our family patriarch in heaven and she warned me (through the quotes of church male leaders) that if I didn't stop there would be consequences for me in these last days. For those of you who don't speak Mormon that means "I have displeased our dead grandfather and in consequence I will not be resurrected with the Saints at the end of this world."

I mean, I replied with a thumbs up emoji--cause what are you going to do? I did sort of want to point out that she didn't even bother to mention the disappointment of our grandmother (also in heaven) and that women's disappearance in this life--and in the next--is sort of the ENTIRE PROBLEM. But CK convinced me to move on because I don't see this family member hardly ever and that's probably a good thing too.

(I have critical brain. And that means I can be a critic really easily, but I also think it means I can say critical things that need to be said. So it can be sort of overwhelming to want to respond to everything. EVERYTHING. And I am learning through this process that I don't, some comments and emails and tweets are better left unopened.)

But back to my cousin's letter--it really did open my eyes to see that I've lived my life thinking of a spectrum which has EXTREME MORMONS on the right side and APOSTATE MORMONS/THE WORLDLY PEOPLE on the left side, and in the middle is MODERATE MORMONS. And that's your life. You hope to stay in the moderate spot, because it's...normal.

...and it turns out: now you're normal. You're just average. You're just doing your normal average life. You're waking up with your kids, making waffles, packing lunches, doing homework, taking walks, texting with friends. I mean, I don't mean to discount the major emotions you still experience, but you're not elect, or chosen or special anymore. You're just like everyone else in America for the most part. Wearing the same underwear as most people, drinking a delicious cup of WHATEVER THE HELL YOU WANT like most people, using all the free time you now have on Sundays (and other days) to going kayaking. Or just sit and do a puzzle with your kids. Not everything has to be special anymore.

And you look back at what used to be normal--average Mormonism, and it feels pretty extreme. And then you look forward to dying without some SUPER LEGACY that you always felt you had to leave and it turns out that you'll probably be forgotten in a few generations (if that) and what a grace that is. I feel exhausted at the thought of being a character that continues to grow bigger and bigger in embellished family stories up until the point where I meet my posterity in heaven and they're like--YOU? WOW THAT'S A DISAPPOINTMENT.

The weight I have felt for so long to keep up the whole charade of specialness is slowly dripping from my life. Sure I've got some skills and talents, but they no longer have to go to the express interest of building the Mormon Kingdom of God on Earth. And while I am sure this is the very reason why so many Mormons love being Mormon (peculiar! unique!) I cannot tell you what a GD relief it is. I say GD because I am still pretty Mormon, all things considered.

I don't have to worry about a patriarch in heaven looking down on me for any reason at all. I mean, maybe he is, but I don't care. I DON'T CARE! BECAUSE I'M AVERAGE! AND HE CAN DEAL WITH IT!

(My Grandfather and I had a very transparent relationship. That's not a ghost joke. I told him how I felt about everything and he was very good at spoiling us and that's also my relationship with CK.)

Sometimes I get comments that stick with me for a long time, and today I am thinking of one in particular--it came from a woman in Rhode Island after the 2008 election where I finally confessed to the world that I voted for...OBAMA. To paraphrase she said something like: I can see how much bravery it takes for you to admit to these things that get you a lot of flak in your community and comment section. But I want you to know that here where I sit in my town--you're not even close to sounding controversial. You sound like you're...almost normal.

It sounds all so funny now, but it was a huge relief to me then. At that point, I was inundated in all the intensity of Mitt Romney And The White Horsed Mormons Will Save America. Which was huge around here. And really, I got probably the meanest comments of my life on that Obama post. Mormon Mothers really hate Obama. I was told at church that I was ushering in the Second Coming of Jesus Christ. To which I was like...and so what? I could use break about now.

I don't think I am making very much sense right now. I'm finding it hard to adequately describe what a relief it is to finally feel like you have the freedom to be ordinary. You don't know how much you've suffocated with specialness--how many years you've gasped for oxygen without really understanding it. How nice it is to go on a plane, meet strangers, interact with the world without the pressing responsibility of making sure everyone knows that YOU ARE SPECIAL because YOU ARE MORMON, and if they'd just listen to you they could be special too.

I am resisting the urge to somehow perfect this post...but I have to go pick up my kid from preschool.

You know, just what average people do!