A Story for the Sisters

On Sunday afternoons sometimes my sister Page would play paper dolls with me. I loved it more than just about anything else I can remember. Page is seven years older than me, and in those times of our lives seven years was a century between us. But we still shared a gabled room, wallpapered in wedding bouquets, and a bed too. In fact, we shared a bed right up until the day Page got married.

This weekend we moved Erin out of the crib, and now you two are sharing a bed. You both sleep like steam rollers and I've found you on top of each other in the dark nights when I check in. But you don't mind, your mouths drop wide open, your sweaty hair bounces in the wind of the fan and your eyes stay shut. Anson couldn't handle that sleepy movement, that boy sleeps like a board.

I wanted to tell you something that Page did for me, something huge that affected me, your daddy and all of us really. I want to tell you about the best part of being a sister: sacrifice.

I am learning that sacrifice means to give up our weaknesses. Here's the tricky thing about weaknesses, we sometimes think they are our strengths, and we go throughout our lifetime unwilling to give them up because we think they make us so great. Or capable. Or special. But really, they make us miserable.

Page had to sacrifice her time to play paperdolls with me on Sundays. I remember her always being a little annoyed with me when I asked. But if she protested, our mom would yell from the clanging and smelly sounds of kitchen dinner be made, "Go play with her Page." However, once we had a fine storyline going on--of peril and paper society--Page would usually play quite nice. And that was all I ever wanted.

Years of Sunday afternoons on our bedroom floor with Hallmark dolls vanished into memories quickly. When I was ten Page started college, married Uncle Vance, became a nurse and started having babies. Lots of babies. And then it was my turn to sacrifice my time. Every few months I'd catch a flight to San Fransisco to babysit Page's children while she took a weekend off. I was there at the birth of two of her golden-haired babies and I learned to love them all like my own.

And then, I met your dad. I knew I wanted to have babies right off too--just like Page. I had graduated from college, studied in London, served a mission, worked in a deliriously fun job and now I wanted to be a mother. But unlike Page, the babies didn't come for me.

Years went by and the babies never came.

(What were you doing up there in heaven?)

This made me terribly sad. I cried a lot. I prayed to Heavenly Father for a baby. I didn't even need eight babies like Page, I just wanted one. But interestingly, every time I prayed I felt my answer was connected to Page and if I were patient, Page would help me have a baby.

I thought this meant, because Page was a nurse she'd have some special idea come to her mind about how I could fix my body. So every few months I'd go visit her and ask her if she had anything new I could try. We tried a lot of things--like oils and massages and diets. But nothing worked.

Then one day Page called me up to her house and told me she had received an answer to her prayers. You see girls, while I was praying for a baby Page was praying to know when she had come to the end of her family. She wanted to have lots of children, she would have had twenty. But she didn't know if it was the best thing to keep going. And in her praying and wondering and asking, she had a very bold, strong impression come to her mind, "If you stop having babies, Courtney will get pregnant."

On the day she told me that, we sat on her bed trying to put her revelation together like a puzzle. Could this be true? Was this just a thought helping Page feel better? We talked and discussed and ultimately my sister said to me, "The only thing that could make me stop having babies is the idea that you would start to have them instead." And because we're both women of faith, and we could both feel The Spirit swelling around as we talked, we decided to believe this was true.

Page had felt her whole life that her value was in her capability to have babies. This was a very core element of who she believed she was, to stop having babies was almost like asking her to stop breathing. And so, while that certainly isn't true, it was a huge sacrifice for her to give up that for me on the faith I'd get pregnant. See? Page didn't really sacrifice having babies, she gave up believing she was only special because she could have them. And in the big picture, that was a very large, scary sacrifice.

I never really told anyone this story, because I didn't think anyone would believe us. I carried on, doubting and wondering, praying and clinging to faith. Finally I told Heavenly Father I would have children if He sent them, but if He didn't, that was ok too. In the back of my mind though, the thought never left me--Page's decision would help me get pregnant.

I can see that almost anyone could be skeptical of this story, and perhaps I would've grown suspicious too, but months after we had this discussion I found out I was pregnant. I'll always remember that day for all of it's celebrations and happiness, but mostly because it was September 6th. 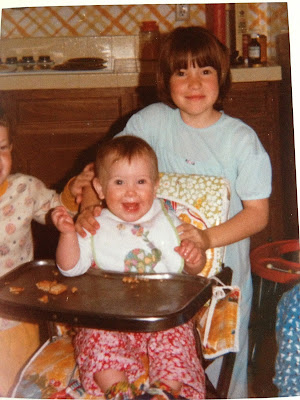