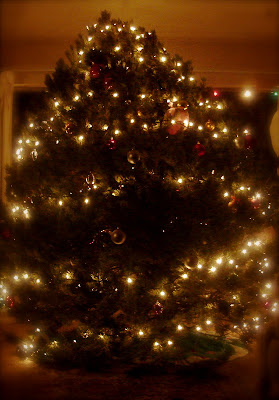 Yes, it leans a bit to the left
Every year I explain to Chup the Christmas tree of my dreams.

"So fat that the boughs fall on themselves, making it look like a tree with a belly and an appetite for more."

But it really doesn't matter because every time we go Christmas tree shopping the tree of my dreams hasn't been plucked. So I graciously take a skinny tree, even though skinny has never been my thing.

We drove straight to our favorite family tree lot, Baum's, and there it was. A glorious, jolly pine as fat as the Christmas season is long, a tree of Santa's physique, front and center ready for my checkbook.

Chup saw it too. The bush of Noel had arrived. It was a Christmas tree miracle, only I was so used to our regular-ol-skinny ninny that I mentally blocked the possibility. I got out of the car and headed straight to the rows of slenders with obvious gaps of greenery. The girls rushed out looking ahead of me. Minutes later Chup caught up with us.

"You want that tree."

"No. No. You mean that bush?" I asked playing it cool.

"You know you want that tree. And you should have it."

"But I am the only one who will like it." I am almost brilliant at the Undeserving Lonesome Dove act.

"I think we should get it."

And before you know it, Chup was dealing with the Christmas Tree Man who had a ready-made ball of red twine wrapped around his fingers.

"You want Butterball, huh?" He asked Chup. "We thought my brother was stupid for chopping the thing down in the first place. But if you want it . . ."

When Jane heard the word Butterball she was on board.

"Look Claire! We are going to get Butterball!"

And if "dumb" wasn't a word around here which induces mouth-flipping (Nielson's rules, not mine) then Claire surely would have used it in her next sentence.

To rectify the believers and non-believers alike, we bought all children Charlie Brown trees to decorate at their pleasure. Butterball was mine to exploit.

At this point Chup was hoisting the tree on top of our car and Twine Man was roping the thing like an elevated cow. I was still in shock that I had been so blessed. Little me, Christmas tree, dreams come true.

When all was secured and paid for we took Butterball to Elaine's French Bakery where the girls and I purchased fruit tarts (they insisted that all transactions were done French) and a slice of pan au sucre. We would've bought Butterball some sort of torte, but he didn't look hungry. (Just a little nervous.)

I've already thought about the day when Butterball will be nothing but a gutter-bound hunk of nature awaiting the Provo city Christmas tree pick-up truck. It hurts inside.

I might stuff Butterball with cotton and keep it for always.