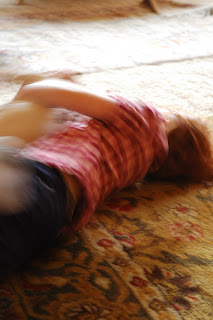 Today at church I stood in the hallway with a couple other bouncing-babies-on-hips mothers.

"What day is it today?" Asked one mother.

"I know it's November. That much I do know." Answered the other.

"I think it is the fifteenth." I offered.

"Mid-teens to be sure." Said the first mother.

We all stopped to try and calculate what Thursday would be if today were the fifteenth.

After a few seconds there was a general concession.

"Thursday is Thursday the twenty-whatever."

True, I may not know the exact date today. I also don't know where my phone is so if you've called please know I haven't checked my messages since last Wednesday (Wednesday the seventh? eleventh?) There are sixty-one unopened e-mail messages in my inbox which I love to read. Just please, know that I am trying. Or, that I am doing my best. I just love that line. So sweetly subjective.

Anyway, this date-less weekend will always be more about events than numbers.

This was the weekend that brought Ollie back to Retro House after his extended stay in sunny AZ. He arrived with his blue tote bag and freshly laundered clothes from Grandma Mary (including his beloved Spidey shirt from cousin Jack). Gigs gave him about twenty Welcome Home hugs. He resumed riding his scooter in our playroom and eating all available crispy carbohydrates. I've heard him say to his sisters, "Claire and Jane. I missed you when I was in Arizona. I did." And those sisters have responded by treated him like the promised prince of hope and joy with rolling hugs and kisses. To which I've also heard him say, "Claire and Jane why do you love me so much?"

This was the weekend that nearly took my mind and hid it in the recesses of house organization and life affirmations. I had to lean on my Chup quite a bit. He became our camp cook and royal discipliner. As it turns out, I am a softy, spare-the-rod sort of parent. When we couldn't rent Kung Fu Panda from Red Box at the grocery store on Friday night, I just went inside and bought it. And massive ice cream cones which ended up in Jane's hair, up her nose and strangely on the backside of her new coat. And a bottle of Coke. Even though I now know there is no special ingredient. (Kung Fu Panda inside joke.)(Couldn't help it.)

This was the weekend that we watched the final installment of Little Travelers. Which is a dvd that makes me want to pack up and take the children to Indonesia until all is put back together in their lives. We always end up with bigger imaginations after watching the Little Travelers discover new cultures. Bali is our favorite.

This was the weekend that Claire and cousin Matthew sat with me in the front room playing a spelling game. They asked me to have them spell words to prove their phonetic prowess. It was late in the afternoon, the sun spilling in from the front room window, the couch perfectly comfortable. Conditions couldn't be any more perfect for a lazy snooze. I fell asleep as Claire was spelling d-i-n-n-e-r so that when Matthew asked for his word I groggily responded "I love you nananananananaaaa." Which was completely uncontrollable sleep-talking. In my dozed out sate I knew it made no sense, but I was too tired to admit to it. He started to spell it anyway, saying "Um. Okay . . ." And I woke up as he was finishing up the "y-o-u."

This was the weekend that the children got to hear their mother's voice for the first time in three months in a phone call. It was sweet and brief. Just a little "I love and miss you" from both sides of the phone. Another milestone we've been hoping to actualize. Another moment we can thank the Lord for granting. And we know there will be more moments to look forward to in the months to come.

This was the weekend where I discovered late at night while blogging that I told my friends at church that today was the fifteenth. Yet, here on the corner of my computer it clearly says that today is the sixteenth.