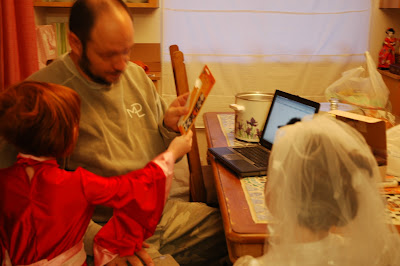 I wanna look like this uncle chup
This week has been devoted to cleaning and organizing Retro House. No corner is left cobweb -ed, no chip disaster un-vacuumed. I am gearing up for the decorating business of this time of the year. There is even a open area in my front room for a Christmas tree. And yes, I am listening to Kozy's Christmas tunes on my radio. This year we are starting early. This year we are going to hoot and celebrate these holidays right up until January second. (So help me.) (SO HELP ME!)

What was I saying?

Right. This week I've been re-evaluating all the stuff that occupies my square footage for which I pay a mortgage. I mean, Chup actually makes the money, but I write the check. I wonder about other wives who have husbands who head up the household budget. If I let my Chup pay the bills I know that they will be paid . . . eventually. After the bill collectors come knocking on my painted-green door. I've never dealt with a bill collector, but I have no intention of . . .

What was I saying?

Chup has a lot of stuff. Bikes, trikes and rockets. Jackets, brackets, tennis rackets. Snow boards, skate boards and games for when you're bored. Chup has a hard time with seeing his stuff in garbage cans. He has no time for e-bay, Craig's list or--heaven forbid--a yard sale. So his stuff becomes part of the furniture and loafs off my weekly dusting. And I love him for it.

But today I almost lost my ability to stay calm in the face of the piles I desired to organize. Tools, camping gear and bitty jars of Tabasco sauce (and the like) were starting to impede my heaven-bound housekeeping. Little happy trails of my husband everywhere I looked.

So I called him at work.

"Your stuff is getting in my way." I fumed.

I really hate it when he says "sorry" so easily. The fight is over before it starts. All of my fire and righteous glory goes nowhere. Most of all, I just feel stupid for getting so worked up.

After we hung up I sat on the floor and thought about all of Chup's goods posted around the house. How all of his contraptions have come in handy lately. He's built swings out of rock climbing gear, slip-n-slides out of saved plastic sheets and tether ball at Jane's insistence.

Then I remembered the night before Halloween when we were in bed discussing how we were going to ensure that Claire and Jane had the best costumes in the whole school. (Competitive parenting! Try it!)

"You know what?" Chup said sitting straight up in bed. "Somewhere I have my make-up kit."

In Chup's former life he was a stage actor (before he found film acting so fascinating). When he did theatrics he invested in his own make-up kit. Lest he had to share blush with one of the acne-infested under studies.

In two minutes Chup had located his kit and returned to bed.

"This is going to be awesome." He told me. And the next morning we woke the girls extra early for their seven am make-up call.

And it was awesome: 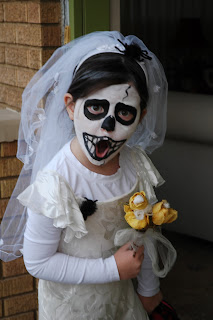 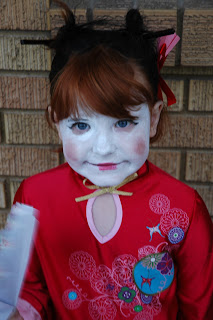 I guess this is the part of the post where I sum up a good moral about how Chup's stuff makes our lives better. But whatever.
Email Post
Labels: Chup Holiday Suddenly Parents