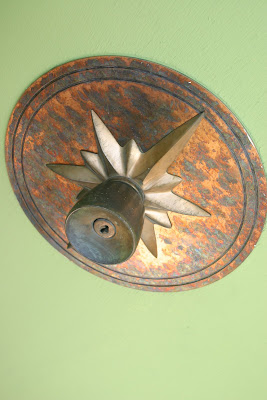 The house is quiet for the first time today and I feel inspired to write a story. I warn of extra details that will not push the narrative further along, but remember blogging really is about sharing insignificant bits that posterity will enjoy. Or will they? Anyway, insignificant is what I do best.

The first of the year found me six months pregnant. I was living with Chup in our Double Wide (which isn't an actual Double Wide but mostly likely had the same proportions, and so it was christened, Our Abode of the Double Wide on the West Side). Our beloved pooch Ralph had unexpectedly passed away in the night and allbedarned if were weren't still in mourning. Dogs are hard to get over, who knew?

Though I refused to believe in the existence of "nesting" I found myself feeling a little uneasy about our living situation as it pertained to bringing home our infant child to our Double Wide. There was nothing wrong with it, in fact I dare say it was as cozy as a cave (all colorful and whatnot) but when I envisioned bringing the bundle of joy home it was not into my blue front room. There was just no way around it. I tried to conjure up the vision, but it would not budge.

So I announced to Chup that we must start house hunting. And Chup, being the avid sentimentalist in the relationship cried and accused me of all sorts of housing hard heartedness (to his credit, I don't spend enough time feeling tender) which I brushed off. When a woman is six months pregnant and still barfing there is little time for other people's emotions. Just trust me.

One day my compatriot Azucar sent me a link to a most interesting home in my childhood neighborhood. That night Chup and I sneaked into the property and gave ourselves a tour using the light of Chup's cellular. It was one word: mine. Or: ours. Yes, I mean: ours. And that whole part of the story, and why we fell in love, has already been chronicled here.

But as we started the process of buying the home, my Chup (short for Chupacabra and rhymes with soup, not cup, I know, I just rocked your world) slowly backed away from his commitment to buying the house. First it was the fact that there is no garage ("Who really uses their garage these days?" I'd counter). Then it was too big ("Well grow into it. We're bound to have more children." I promised). As he grew less enamored I became obsessed. Finally one night Chup went so far as to utter the words "I hate that house!" which nearly caused my final breath.

There was nothing to be done but pray that my feelings for the house would disappear. But every time I proceeded to do so I felt inspired to fight on. Fight on! This was at a time when Chup was very busy with presentations at work which induced his stress level up to his earlobes. I treaded lightly when bringing up the issue of the home, but I couldn't let it go. So help me it had to be mine. So help me! I said.

Finally, in an act of desperation I prayed to ask if it was alright to start bargaining. Could I promise Chup that his stresses would dissipate if he bought me the house? And lo, it came to pass that I felt empowered to do just that, and I laid out my cards for him to see promising him from the heavens above that he would be blessed if he would just BUY ME THAT HOUSE.

Our sale went really fast. Everything fell into place and within two months we were moved in ready to start the light remodel. Part of the charm of the place is that it is in pristine condition and for the most part hasn't been touched since the 1950s. Even the curtains, I tell you. The house is re-tro and I didn't want to mess it all up with the fashions of today. But then the baby came, then this, then that, and we've only just begun to rip the wallpaper off the walls and ceilings (yes, ceilings, that really hurts) and finalize my feelings about having carpet in the kitchen (Christian's mother Mary reminded me that it is good for crawling babies, she had eleven, she would know) and ok, maybe just rip out the whole kitchen and start over. So if you stop by, please know that the house is still, you know . . . I don't know . . . in a transition of sorts.

Tonight after the children had chatted with Daddy, they were bouncing off the (wallpapered) ceilings. I couldn't contain them, didn't even try. But when a call came from a news reporter wanting to do an interview, I hid myself away in the nursery for a quiet space. No luck, they followed me in there still rolling around on the orange shag carpet, while taking funny pictures of eachother with my crappy SLR.

(At this point are you thinking, is this story still going on?)

I exited and went into my bedroom. They followed jumping up and down on my bed hitting eachother with fluffy pillows. While still answering questions, I tried Ollie's room next, but they crashed that scene in no time, pretending Ollie was "baby Bronx" and Claire was his mother (who was married to a man who could give anyone a ruthless"knuckle sandwich.") Then, as I continued to balance the phone and The Chief, I tried the den, the girl's room, the living room, half of the kitchen and lastly, our beloved sub-basement affectionately called The Dungeon.

Kids should really be spies, they are phenomenal at tracking down people who don't want to be found.

When the phone call was over I found myself in our green room covered in Astro Turf, swinging on one of Chup's homemade swings. I thought about my movement of the last fifteen minutes and felt grateful for feeling so reassured that this house had to be occupied by us, and quickly too. Our Double Wide, bless it's heart, would'nt have seated us all comfortably like the Retro House does. Its location to family, school and ice cream simply cannot be beat. Plus, enough rooms for me to escape to when in dire circumstances.

Then I remembered this summer when Steph came to town. As soon as she could, she brought her crew over (via bikes) to my house for their first grand tour. Claire and Jane explored all the highlights on their own, while Steph, Lucy and I took our time admiring the fancy light switches and copper tiling. Then, as a vote of confidence that Steph rarely gives out, she said "I like this house." Nie Nie Approved (sparkle!) When she is pulled out of her sleepy state she'll be able to envision where her children have been for the past few months. That is good.

As I told Christian today on the phone, it is a gift to be able to have the children live with me right now. An honor. And I feel that way even when I wipe up messes, intervene in squabbles and be chased around. I can't deny that after the crash I knew the very reason I was directed to push Chup and the closing date. We were being watched out for, as always.