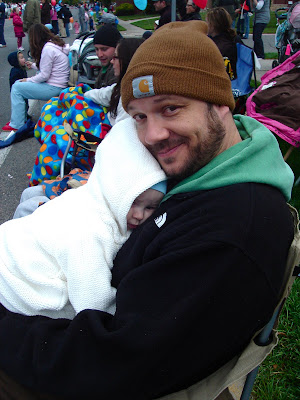 Chup and The Chief at the Homecoming parade. Homecoming will now be capitalized in this post always and forever.

And now a word about my village of sister-in-laws.

Saturday was the BYU Homecoming parade and football game. We all bundled up--it was snowing--and headed to the parade route. The only aspect to this event worth braving the cold is that revelers throw out fistfuls of candy. One does better to collect candy during one hour of the BYU Homecoming parade than one whole night of trick-or-treating. Plus, all sorts of coupons for carp your kids will never use!

I was in a bittersweet mood. A free front row ticket had become available for the afternoon game, but I had decided that I was no longer in a position to spectate. In short, motherhood made it hard for my to be the BYU Cougar football fan that my past had allowed. He Who Nurses Every Fifteen Minutes, or, The Chief was one issue. My three little additions was another.

So I sighed, and gnawed on some miniature Twizzlers I had stolen from Ollie's stash.

Before the parade, Lisa was first to greet me with her lovely smile and appreciated funny. After the parade Megan--ever ready with support--dished to me a compliment which was locked into my brain ready to be pulled out on insecure days.

Later in the afternoon Suze insisted that I go to the game. She offered to manage The Chief so that Chup could also have an afternoon alone to build a relationship with his new computer (which computes!) Katy gathered Claire, Jane and Ollie, and refused to release them until I had sufficiently promised to go. Lindsay offered her services, that of nursing The Chief if needed (which is something we do in our family, we are tight like that) as well as her newborn, Sweet Marie.

So I accepted, and outfitted myself in an old snowmobiling outfit and off I went.

The game was great. The atmosphere sport-o-rrific. My dad bought me a sweet hot chocolate which I am sure was blessed before serving to the masses. At half time I chatted with my dear friend Trish. Before I knew it time was calling me home. Chup met me at the corner and we--along with The Chief--capped off the night with a couple rolls of sushi and chocolate cake. My great band of sisters had taken care of me. I was recharged, indeed.

Anyway, to my sisters in the law, I love you all. Thank you for marrying my brothers and becoming my sisters. And for giving me chewable nieces and nephews. Our village is growing stronger each day.


I also want to thank Steph's sister-in-laws in Arizona who have been a huge support to me as well. Darin owes me a Chipotle Burrito and Diane promises to be my personal jewelry shopper at Last Chance. Liz sends me photos on demand and Sarah keeps me informed of media personal who have celebrity status. Heidi sent us adorable handmade quilts, while Helena helps answer e-mails. I could go on, but the Nielson's have eleven children in their family, while we only have nine. The difference overwhelms me. But it suffices me to say that I know Steph is in good hands when I am not there. Alice is singing. Debbie is smiling. Good women in a great cause.

All of this charity makes me think of this quote on my mother's fridge:


“There is in every true woman's heart, a spark of heavenly fire, which lies dormant in the broad daylight of prosperity, but which kindles up and beams and blazes in the dark hour of adversity.” -Washington Irving

You know what? Writing such nice things about people makes me plum tired.