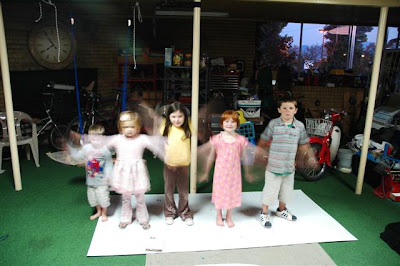 Playing with cousins after a Secret Store adventure
When Chup and I drove to the cousin's house to pick the children up this afternoon Claire came out of the house with sad eyes.

"What is wrong?" I asked (always with a hint of panic).

"Well, it's just that we were going to go to the Secret Store. But now you are here."

When Stephanie was old enough to understand currency, but young enough to not rebel against her mother-given bowl cut, she had an uncontrollable sweet tooth. Candy, candy, candy always on her mind. Along with the desire for treats was another constant in Steph's life, her cousin (from across the street) Katie D. Katie D and treats. That pretty much sums up the first sixteen years of my sister's life.

One day Steph and Katie D were wondering around Wymount Terrace which is the glorious kingdom of student housing for married BYU students. As luck would have it, they discovered a miniature convenience store hidden away behind the student housing office. And behold, there were freshly baked brownies, cookies and chocolate donuts in plastic encasing ready for consumption! Who knew?

From that day forth, Steph and Katie D did just about anything they could to raise money for the benefit of Secret Store shopping. They went so far as to start a dried flower business built out of the old playhouse in the backyard. You could get a wreath of crusty roses for five dollars. Or a spray of browned daisies for your mantle (perfect for any season!) As I remember, Katie D was the wizard behind the business, while Steph did most of the design. But all orders were celebrated with a trip on a bike to buy the freshest donuts in town.

And here we are, a generation later still finding the joys in a trip to the Secret Store. How could we not oblige Claire and her wadded-up-dollar-bill-toting cousins?

So Chup and I drove them past the old church, over to the Wymount housing offices and parked in front of that very same store that Steph visited so often. That is when it dawned on me that it was still a secret to me as I had never before been inside.

"Wanna drink?" I asked Chup as the kiddies filed out of the car.

"Let's see . . ." He replied sarcastically reminding me that one cannot get a hard core drink on BYU campus. No Coke. No Mountain Dew. No Dr. Pepper. Nor Mr. Pibb. Something about caffeine and addiction, I think. Good for us abstaining Mormons.

The Secret Store is no bigger than an average master bedroom's closet in a newly constructed home. It looks to be fifty years old judging by the frosted brown linoleum flooring. There were two fridges, one for drinks, the other for BYU Farm dairy products. I first looked for Steph's beloved chocolate donuts, but only found mint brownies with a violent amount of kelly green frosting. The children grabbed ring pop, ring pop, ring pop, ring pop and skittles. A Fresca for me. Thank you.

After all the treats were purchased I took a moment to imagine Steph there twenty years ago. A smile pushing back her ample cheeks, short hair with bangs barely obstructing her vision, and of course, dazzling freckles. And there was Katie D counting out each penny. Giving Steph her cut of the dough with palms out flat. Then I could see Steph turning to the baked goods with eyes as big as the cookies inside. I couldn't help but think that I'd give just about anything in the world to have those days back.

Then, looking down at Claire and Jane laughing with their cousins as ring pops were placed on left index fingers, I realized.

End of an ERA

Troubles Are All the Same