I Sometimes Type Lucky Instead of Lucy 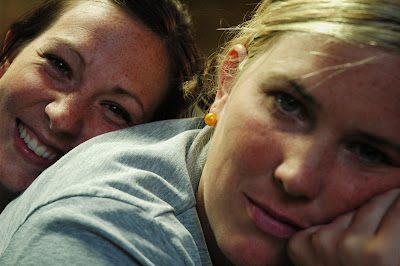 Lucy and me working hard for these blessings . . .
Today Ollie, The Chief and I joined Lucy and Gigs at the farm for a lunch. On the menu was the classic cheese sandwiches, tomato soup and pickles. Good pickles too. Lucy is a sweet cook.

So there we were with our three boys. I nursed The Chief, Ollie watched Garfield's Halloween (we start early) and Gigs repeatedly ground cheese crackers into the carpet. And when he was done with that important task he moved on to whistling around the room with his big, puffy cheeks. (If you've never heard a two-year-old whistle then there is something to add to your wish list for Christmas.)

I hadn't been to the farm for awhile, so I walked around when the babe was free of suction. Lucy's husband Ric had remodeled the bathroom so that Gigs would have a nice tub to soak in at nights. Giggy's bedroom was decorated in his mother's Nie-esque way with handmade quilts and vintage decor. His toys were towered in a bright yellow basket in the family room. His shoes all lined-up in a row.

Lucy told me that earlier she had let him outside while she vacuumed the house. Normally in this instance he'd head right for the chicken coop, but today she found him in the garden picking cherry tomatoes off the vine. His chubby face was stained red with juices. It's a farm life for Gigs.

Then she produced an overstuffed garbage sack of clothes she no longer liked. She asked me if I wanted any. I told her that I would have a fitting problem (as in, there is no way I would fit). She reminded me that I wouldn't be postpartum forever. Then she pulled out a sweater that I had given her. My feelings would've been hurt, but who has time for that emotion? So we laughed.

Later in the evening Lucy arrived at my house to help me in that sluggish time of the day (from three to bedtime). She rocked Jane awake from a nap, helped me feed Claire and mediated the brother's squabbles over the Spiderman scooter (hot commodity!)

She bathed the girls, did their hair, cut their finger/toe nails and cleaned my kitchen. (Four things that wear me out and don't get done as much as they should.) Then, in an effort to expend energy she played with all four children in the living room as I talked to a traveling Chup on the phone.

When it came time for her to pack up Gigs and head farm-ward, she asked if there was anything more she could do for me.

"Promise me . . ." I started. "Promise me that if anything happened to me, you'd do the same for The Chief."

"Of course I would." She replied.

And I'd do the same for her children. (As soon as they come to earth.)


I will have a C&S Update later tomorrow. Thanks for checking in!
Email Post
Labels: Nie Updates Postpartum Suddenly Parents