I Could Never Do It Justice 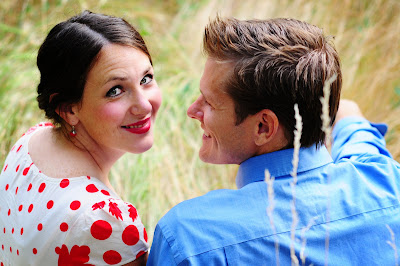 Do you want to hear a love story?

(Ok, but I must warn you, the ending is still in the works.)

When Stephanie was a teenager she fell in love. With a boy. A boy who I will call Grant. This was a remarkable occasion because Stephanie was terribly shy when it came to boys. And therefore notoriously picky. She couldn't even look at one without her cheeks turning to scarlet. But Grant was an easy going kid (who reminded me of a less-goofy shade of Shaggy from Scooby-Do) (where are you?).

Stephanie and Grant were essentially the same person on either sides of the gender spectrum. They were young teenage artists and nothing in high school was cool enough. They were cool. Then one day high school was over and Grant was preparing--as any good Mormon boy should--for his mission. This was very cool.

Then at his appointed time and place Grant was shipped to his two year mission leaving Stephanie devastated. She wouldn't eat. She couldn't sleep. And as I remember, she rolled around on the family room floor a lot, as though she were in actual physical pain. I think my mother went so far as to call the whole missionary mourning pathetic. And it went on-and-on for months. On-and-on, I tell you.

This was bad news for those of us still living in the house. Two years of this? No hope in sight either, we all agreed, because our delicate sister would never resort to dating anyone else ever. Her love and loyalty would never allow it. So she spent her days working at our father's business answering calls and filing away files. Counting dragging days . . .

But one day the phone rang at our home.

I picked it up and the caller asked for my father. I notified the caller that he wasn't around and asked if I should take a message.

So I wrote this message:

Then I hung up.

Next to me, on a dizzy bar stool stooped Stephanie. Shoulders slouched. Head down. Gloom. Despair. Doom. Pointless doom.

"Make sure Dad gets this message." I bossed, passing the paper to her as I was headed out.

Steph looked at the paper and BOOM! Her being startled to life.

"Yes." I said, looking curiously at my sister who suddenly had a bit of light in her soul.

"He comes to the office to sell Dad cell phones."

And then the flush of red in her cheeks as she sat staring at my scribbled message.

"Christian." She repeated in a trance-like monotone.

And suddenly: Grant who?

In the weeks to follow Stephanie did her best to look transparently cute every day at work. One day Christian, The Charming Cell Phone Salesman, asked my little sister out. Turned out that Christian (Christian, well-named man) was not only hot, but intensely passionate, intriguing with a head full of ideas. In a month's time they were talking marriage. Young, young and why not?

But before they could meet at the altar, Christian was off to Africa to help film a documentary for a month. The night he left felt sickeningly familiar. It was Steph, rolling around on the carpet again groaning. We braced ourselves and hunkered down for a month more of her dramatics. Up until now, it may have been the longest month of my mother's life.

Christian was able to visit with his young bride for the first time since their airplane crash. You'll want to know that he was strong. He told her to fight. He thanked. He prayed. Hearing this gives me the feeling Steph won't be long in recovery.

After all, Christian woke her up before . . . he can do it again.