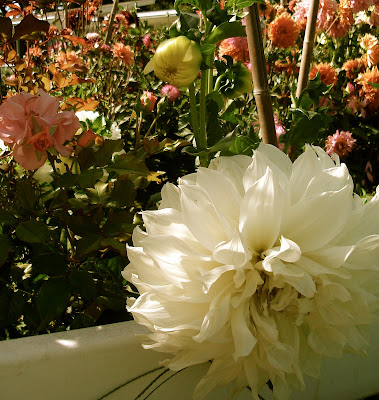 We took a walk tonight--the children, The Chief and cousin Matthew--in the rain. With The Chief safely dry from the inside cavity of his stroller, I focused my attention on my small crowd skipping down the street, acting as though it were a dry day in Mesa. Our goal included a stop by Grandpa Don's dahlia garden to see flowers bigger than dinner plates.

Claire and Jane ran ahead while Ollie and Matthew (8 years) jumped off of every ledge presented. At one point, Ollie misjudged his landing and ended up with bumped knees. His late-afternoon tiredness set in and he insisted on being held all the way home. I gave Matthew the post as stroller-pusher and focused on carrying a drowsy child through the neighborhood.

Our streets are occupied by families, mostly of the newly-married variety. Young husbands and wives going to school together, eating noodles at night, planning for busy futures. As we walked we saw several such couples spending time on front porches watching the rain.

Down the street I saw Claire and Jane talking to a young man and woman. Claire is a charmer and can easily engage the adult psyche. Jane is just too cute to pass up. I smiled as I approached the scene.

"Are all of these kids yours?" The young woman asked me, with no surprise in her voice. After all, we are Mormon.

I thought about that for a second.

They are all mine. I've always felt as much. From the moment they came to life they were mine to love unconditionally. Even after The Chief was born I was surprised at how much I had already experienced of motherhood having been a sister and an aunt. At times it even made me a little sad, that my initiation into mothering emotions had started years before I was ever a genuine mother.

"The baby in the stroller is for sure." I answered back quickly remembering my special delivery.

Claire was at my side now begging for a whisper in my ear.

"Tell them about my parents."

This has happened before. Though Claire has long-since loved the game of "Abandoned Orphan" she certainly doesn't want anyone believing that she is one right now. It makes her feel better having people know. So she asks me to explain the situation using my rusty adult-translating communication skills. We've rehearsed this conversation many times.

"Claire's mom and dad were in an airplane crash." I started, watching the faces of the young man and woman turn from smile to shock, like bread to toast in a toaster. So I continued,

"She wanted me to tell you that they are in the hospital getting better."

"We hope so!" I sounded resolute.

"I am her aunt and she is staying me and my husband for awhile."

The young man looked like he was going to faint.

At this point Ollie himself was passed out, his chin perched on the round of my shoulder, feeling very heavy for a three-year-old. The Chief was wailing from the enclosed stroller. Matthew was doing his best to soothe him, although it was to the point where my anatomy was needed. And Jane was skipping down the street singing to herself. Like always.

"It looks like I do, but I am just fine. We'll take your prayers." I offered.

They both nodded at me slowly like shell-shocked soldiers.

Claire waved them good bye, having felt like all was honest. I was sorry for having dropped an emotional bomb and walked away so suddenly. But my herd was needing a shepherd.