She Wouldn't Have Missed It 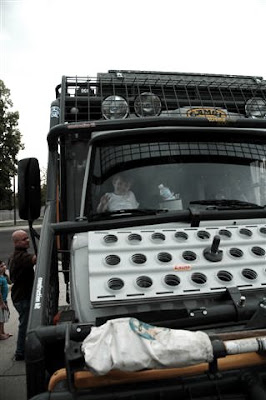 When our simple Sunday meal of enchiladas, cooked beans and tossed salad was consumed, Lucy and I cleaned up the kitchen while our husbands occupied the children in our gigantic covered-in-astro-turf playroom.

"I miss Steph." She said as she reached up above her head to put away a cookie tray.

I thought about it.

I didn't feel the same. In fact, in this past week I've felt my sister near to me, sometimes when chaos consumed and always in very quiet moments. As my mother whispered in my ear one week ago as we took that fateful (FATEFUL!) long (LONG!) trip through the desert to Utah, "Steph will be wherever her children are." And with that, I felt an extra arm around my shoulder, as if my gracious little sister was assuring me that she'd be along for the ride.

I know that Stephanie's body is working on survival. I know that a portion of her spirit resides there, keeping her heart beating, allowing for her body to heal, but I cannot deny that she is also here still raising her chickens through her sisters. This adds to my theory that the soul defies earthly logic, being able to be in two places at once, a thought which gives me much peace right now.

After dinner was cleaned up it started to rain. We took all the children outside and tagged around on the front lawn. Thanks to Gustav, the rain intensified until we had a genuine down pour on our heads. Brave Jane was the only one who insisted on staying out, so we put her to good use by fetching not-yet-ripe apples from the backyard.

Our fun continued when Uncle T arrived in macho fashion in his Unimog. Ollie insisted on a ride and was allowed front seating as they paraded around the block. I know he imagined himself an "army guy" in his "army pants" saving the world from "bad guys."

Chup produced his remote control cars and chased us around the house. Even Uncle Ric screamed like a siren, until a determined Gigs literally put his foot down (on the car).

When more cousins showed up, the playroom turned into a dance club where docile Claire twirled around the room to the beat of Bette Midler's Blueberry Pie--a family classic.

Oh, Blueberry Pie, sad and shy,
won't you come out of your shell?
Life is swell, so are you!
Please don't be so very blue.

After burning off hours of energy the children started to slow down. Chup let them make beds in the den and watch a movie. We had a short celebration that tomorrow was a holiday, which is better punctuated by NO SCHOOL! Jane was the last to fall asleep asking for apples, peanut butter and a request for me to move Ollie who had rolled in his sleep across her pillow.

I ended the day talking to Mom in Mesa while watching the steady rain fall underneath the street lamp from my front window. Mom is weary even though all is going as expected. Christian is healing well. Steph's progress is slow.

"Remember to be grateful for the Lord every day of your life." She said to me in a tired voice.

Just before I sat down to write I double checked all of my babies. I kissed each one and whispered a little secret in their ear. The Chief was sleeping mouth opened wide. I stood and watched him for awhile.

"It was a nice day." I whispered out loud in the quiet nursery.

"Indeed it was." I felt Steph reply back.
Email Post