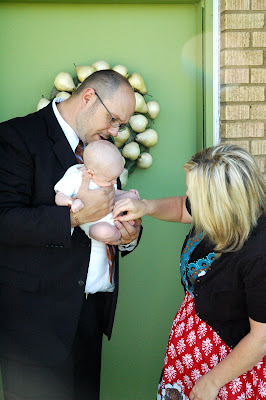 When we talk about the Mormon experience we mostly account for the quintessential special occasions. These include our own baby blessing, baptism, ordinations, endowments, missions, marriages, baby blessings for our children and funerals. There is always something to be celebrating when you believe in a God that gives you reason to do so.

Although I have been prone to pine for attention in my life (hello blog!) I've seemed to shy away from my own Mormon milestones. When it was time for me to go to the temple for the first time, The Councilwoman and I showed up for a very early session on a weekday. Just the two of us alone in white. After being released to my parents, I arrived home from my mission at three am to no signs or ceremony in the airport terminal. My marriage was an elopement, my sealing a small ceremony with an intimate family dinner that followed.

This weekend my time had come to be initiated into the next stage of my Mormon experience, the blessing of the baby. Naturally, I wanted to do the blessing at home rather in the church services, but Daddy (aka Chup A. Cabre) insisted that we take it to the chapel. Fine, I felt, until I started to think of all the things that could go awry.

Or the circle of bouncing men would drop him.
(My bishop said it's happened before!)
Or flip him.
Or cause him great dizziness.

He could puke.
He could regurge.
He could go gooey poop all over everyone.
Ruin his winsome, cross-generational, knit blessing onesie.

I thought about all (and more) possibilities all week. I even stewed myself sick at several high anxiety moments. And now you see why I prefer low key (lower than low key if possible) as does my husband who has to deal with my imperfect faith in fate. Though, I was somewhat comforted knowing that The Chief only empties his bowels bi-weekly and he had already accomplished movements in the recent past.

Never-the-less to combat this general state I prayed. Chup prayed. It was a little funny, asking that my child not release his bowels at an inappropriate time, but no prayer is too insignificant. Like I always say.

This morning The Chief awoke with a pleasant spirit. Chup and I dressed him together making sure to remember to part his feathery hair with good smelling baby lotion. Though his feet were too big for the tiny white baby booties, we managed to lace them on his growing extremities. When all was in place we headed to church, almost forgetting his copper bracelet Uncle Ric made for this very occasion.

During the opening hymn my baby boy continued to roll around flashing his delightful smile. When in good humor, he raises his eyebrows, turns his head east or west, and grins as though he is shamelessly flirting. I am telling you, I hope to have seven trillion more babies. Pineapples-to-pieces they are fantastic!

But when it came time for the blessing to occur, The Chief suddenly contracted a case of hiccups which nine times out of ten induces tears. Then, on the way up to the podium one of his ill-fitting (but tender) booties came barreling off landing near the front row. (Thanks Md for the daring retrieval!)

And you know, strikes come in threes!

I listened as Chup's booming voice sounded in the speakers. A name was given and blessings started to be pronounced. My soul was peaceful, The Chief was quiet and when it was all over the ward got to view my baby--Lion King style--as he was held up for all to see (and go like this: awwwwe!)

After The Chief was properly blessed and presented we returned to in the congregation with our family. The little guy started to get sleepy as Chup and I passed him back-and-forth quietly thanking him for his agreeable behavior. He had been such a good boy, even smiling through the whole ordeal. Finally when his eyes started to droop--his mid-morning nap quicking in--we heard a loud and spacious gurgle emanating from the belly of the baby.

And that is when he completely and utterly eliminated all goo from his vast intestinal track making for a yeasty-smelling, mustard-spotted, sleep-induced baby of mine.

But at least he waited to be blessed first.

Speaking of the Mormon experience . . .
Utah Friends: Remember Wendy from Blue Lily Photography who took amazing photos of The Chief? She can take your family photos when she comes back to Utah in October! For more information please go here!
Email Post