To All My Sisters Who Still Hope 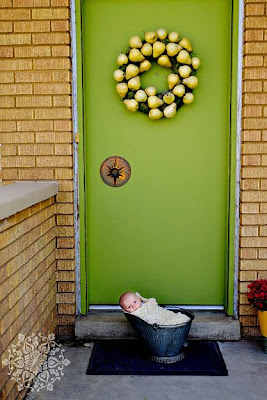 If only The Chief arrived in like fashion!
Photography by Wendy of Blue Lily Photography
The very first month that we tried for a baby and did not conceive I was devastated. I went to my parent's house, slunk into a fetal position and wailed. It wasn't just a missed cycle that I grieved, it was the unshakable feeling that this was the first of many to come. It was a manifestation of a personal revelation that said "Infertility is your life's burden."

The second month I thought I might be pregnant. I was late by two hours. In trying for a baby everything is so calculated, you know, timed for best results. Caught up in my tardiness, I had forgotten the lesson that accompanied the previous month's period. This time I was reminded, and given more specific instructions, "It will be five years before your conception."

When we married, Chup and I decided to leave birth control up to the Lord's timing. In all disclosure, I felt that such obvious faith would be rewarded with ample fertility. Chup, on the other hand prayed that the Lord would know that a baby-right-off wasn't prudent for us. In this I learned that giving control to the Lord sometimes feels like chaos. But not necessarily directionless chaos.

Twelve barren months later, I gave into the current belief that infertility after a year is reasonably a medical issue rather than a spiritual one. I called a specialist, and while the phone rang, my head echoed "Don't do it. Don't do it." Five thousand dollars, a couple month's worth of deflated pride and some strange, fruitless procedures later we decided to quit.

About that time a friend came to visit a friend whom I wanted to meet. She had also carried the banner of INFERTILE, came to understand that she would be blessed through adoption, and had become a mother to a beautiful daughter some time later.

"I knew I was supposed to adopt." She declared.

And when she said the word "knew" my heart started to flip like a pancake on a hot griddle. I also knew, but I had never declared it to anyone. Instead, I listen to years of advice and misdirection aimed at me to direct. Then she asked me,

"I am going to conceive." I said. And when that statement hit the atmospheric pressure of this earth it transformed itself into light so I felt like sunshine was figuratively bursting out of my body.

Not only did I know I was going to conceive, but there was no explanation for our situation other than Heavenly Father was in complete control. The same control that we (thought) we gave him by choice in the first place. He was exercising our right to agency. The baby was coming--coming via my body--all in good time.

Then, for the rest of the time that remained of the initial five years I swam in the cycle of stability, frustration, which lead to doubt. Close friends and family often had to question my seemingly lackadaisical approach. It was heavy on the spirit and non-existent on the body. Fine, fine, fine we understand what Heavenly Father is saying, but what is the doctor saying? When in these times the Lord would visit me with encouraging inspiration and I would start the cycle all over again. Many times I had to review what had been said, "you will conceive" "in five year's time" "your body is perfectly healthy" which became more and more specific until finally I not only knew that I would conceive, but I knew how old I would be and the actual month it would occur.

Only, on the last month--as a tactic of survival--I decided to give up all hope for motherhood. I poured every last drop back out into the ether and replaced it with current contentment. I needed to be able to say that my happiness was contingent on nothing. I had given my will to the Lord and His will was done. The hardest thing I had ever done. Or hope to ever have to do.

It has now almost been a year since my stalled infertility. I came to know that pregnancy carries with it it's own special bag of insecurities and anxieties. Should I be blessed with that once-assumed ample fertility from here on out I will be ever so grateful. If not, and my months of wishes return I will also be grateful. And this is why: Something still grows inside a woman who doesn't conceive a baby. In her grows character that is consumed with confidence, humility and desire. A symbolic embryo that is hers to nurture and others to behold.

And its birth is phenomenal.


Would you like to see more gorgeous photos of my baby taken by the famous Wendy of Blue Lily photography?