Notes from the Gem State 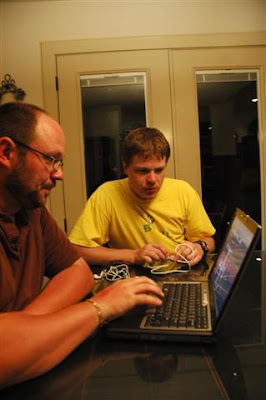 Typical Evening
Let me level with you, I never cared for Twin Falls Idaho much.

I tried to like it from the beginning. I toured the sights, ate the cuisine and met all the folks. I wanted to be impressed with the Niagra of the West (Shoshone Falls) but couldn't help but compare it to the Niagra of the East. I took pictures of Balanced Rock, but felt pretty sure that it wasn't just juxtaposed by nature. I tried the hot fries from Steve-O's to Jackson's Cafe in Buhl (the Trout Capital of the World!) but still salivated for Stan's in Provo. I took lengthy walks out into the endless fields of corn, beans and potatoes, but missed my mountains.

Even this: Their canyon goes down into the earth, rather than up to Park City.

And let's just not start with the Twin Falls County Fair.

But most of all, I hated turning into a Gadget Widow as Chup and Md abandoned all for a weekend of computers, remote control planes-trains-automobiles, gaming consoles and the wizardry of anything with a hard drive. (No pun intended.)

But something happened this weekend. Whether it was taking The Chief up for his very first visit to the Gem State, or fact that the Blue Lakes Blvd Article Circle's soft serve is more creamy than that of Orem's State Street Article Circle, or the discovery that there is now a place to get schwarma in Twin Falls (Twin Falls Burger and Kabob) I don't know. All I can say is that I've had a change of heart.

Wait . . . now that I think about it, I did feel a sort of melting when we all went through the new Twin Falls temple. All dressed to the nines, the structure boasted marble from Italy, light wood from Africa and decorated on windows and woodwork was the Idaho State Flower, the Syringa. I think Fancy has come to this quiet town in the Magic Valley. By golly.

I can do fancy.

As we moved from room to room in this lovely place of worship I felt more and more like this could be my temple someday. If Chup needed to get back to roots (beets, potatoes, etc.) I could follow. There would be Honey and Popeye The Chief's devoted grandparents living on the canyon rim. In the next town over I could visit Lawdy and her house full of delightful children and take walks next to the corn fields. I could learn to shop in the streets of the post-dated downtown area and eat potato pizza at Gerties. If I could convince Kentucky to buy the house next door we could be Gadget Widows together and push our sons in the communal backyard swing set. Does this blog even know how much I love Kentucky? She's the mustard to my mayo (inside joke).

So it was that I made peace with Twin Falls Idaho, the hometown of my beloved. I am ready if the Lord should send us there.

But please Heaven, don't be too hasty. 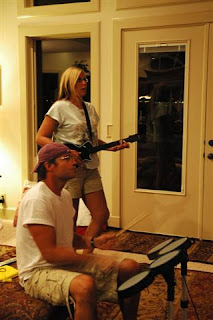 Muffin and "boyfriend"
Chup's little sister Muffin brought her "boyfriend" to meet us this weekend. I've decided that there is nothing more I like than to be the skeptical family member.

Should Muffin date him?

I'll be the judge of that.

So I asked him forty four million questions like,

"Where are you from?"

"Where does your mom live?"

"Have you ever had dysentery?"

I also tried to put him in as many socially awkward positions as possible just to see how hot the pot could get before he jumped out. I nursed my infant in front of him, I asked him about religion, politics and feminism, and I made him say something nice about my parents-in-law when the family was having a real and tender moment.

I think he really got sick of me because at one point he said something about me being "the pregnant one." After which he took two distinct jabs at my wardrobe choices.

As you can probably guess, "boyfriend" didn't not score well on my report card.

And it's too bad no one ever listens to me. Apparently she's just going to keep on loving him anyway. 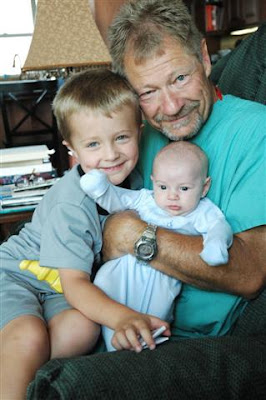 Don't you just enjoy this picture of a doctor, batman and a ghost?