Before The Rumor Persists 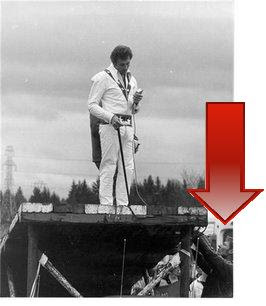 In my comments today Jannika writes:

Hey now, Twin Falls was hot stuff when I spent the summer working in Sun Valley, ID. There was no where to shop in Sun Valley (unless you were a millionaire), so my friends and I would find someone with a car and delight in the two hour trip to civilization (Twin Falls!) and a mall. It really was a big deal! The Shoshone Falls are pretty cool too--in fact, one friend told me that Evil Kinevil once tried to cross the falls on his motorcycle. If I remember right, I think he might have even died attempting such a feat. Though I now live in the center of the universe (Boston--or so many who live here think!), I still have a special place in my heart for Twin Falls. Enjoy your trip!

This comment was worth a whole post-of-a-reply to say two things:

Above is a photo of Knievel just before he attempted his jump across the Twin Falls Snake River Canyon. Just to right of the stage you will see my equally adventurous father-in-law Popeye who was the promoter for the whole event. Though Popeye is The Chief's familial twin, let us hope and pray that the little guy doesn't also contain the gene for death defying desires.

Secondly, Knievel didn't die in the jump, although he did not make it across the canyon (so the legend goes from the still-disappointed-townsfolk). He died last year of natural causes.