And It Wasn't Even April Fools 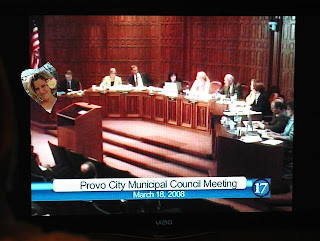 Tonight I got a call from my mother.

"Did you watch The Council this evening?"

"You know how I love to watch The Council,"

"but I became otherwise engaged watching the worst reality series ever created, Hell's Kitchen. You know, because I like to be dumbed down occasionally just for sport."

"Well, you should've been watching tonight."

(It has happened before, it's getting quite commonplace, really.)

"Well, but this time when it was mentioned one of the members of the council exclaimed, 'SHE'S HOT!' "

"And did they get that on official record?"

"And then did you second it?"

"And then did you pass it?"

And so it was that The Council had before them--at last--one issue they could all agree on and they let it slide as some silly, inconsequential comment.

Is there no justice for The Truth anymore?