Our Brand of San Fran

You know what I heard?
I heard that you love to read travelogues.
Today is your lucky day then, because I just traveled.

Well, me and Chup.

I call this photo: A Shadow of Two Unions.

(You can pretty much figure it out.)

We spent a gorgeous amount of time shoe shopping in Union Square. We looked at orange shoes, striped shoes, slip-on shoes and fancy leather shoes. We rode escalators up and down stores with racks and racks of shoes.

Not for me of course.

Shoes for Chup. He is now super-gluing these Tsubos together until he finds another pair that he can love as much as his dear red-laced, blue-touched shoes.

I don't need shoes because I am in a relationship with my Crocs. As for the haters out there, how do you like my toe cleavage all up in your hater grill? Comfy too.

And speaking of shoes, we found that they make the best of travel companions. This conclusion was made after we tested out all the transportation the city had to offer. Car, trolley car, the Bart, shuttles and taxi. Nothing better to get you around than God's own creation: The Feet.

Another good creation is my favorite peninsula taqueria. So good, this place, that I don't even know it's proper name. Rather, we call it The Taqueria and order in Spanish. It was first found by my sister Page who lived around the corner of the oddly-multi-cultural strip mall where it resides. It's tucked away in San Mateo, just bordering Foster City. So tasty it starts labor. No joking, I saw Page eat a Taqueria burrito and hours later we were driving to the Standford hospital with her, in the front seat, breathing heavy.

Would you like to see me holding up a burrito? 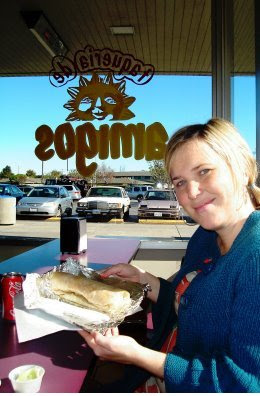 It didn't start my labor though, cause The Chief isn't done cooking yet.

Before the Taqueria, Chup drove us to his favorite toy emporium Talbots. I dare someone to go there and not be magically transformed back into their five-year-old self. When I see the art supplies I wail, "WANT THESE MARKERS PLEEEEEASE!!!" And to the Madame Alexander dolls, all dainty in glass shelves, I declare "I WANT THAT ONE!" or "NO, THAT ONE!" Because how can I pass up the doll dressed as Scarlet on the way to the barbecue? It is pure pleasurable torture.

And Chup, with his funny delight in little things, found a teeny-tiny dragon and bought him for fifty cents, named him Smokey and brought him around town with us.

We had a nice dinner at Houston's on Valentine's Night. The city was soaking in Romance. All the street flower vendors were catering to lines of business men on their way home. I passed on flowers, but said "yes thank-you" to desert.

After dinner we drove around Pacific Heights and down to the Presidio to look at the ocean at dark. Then we took the Great Highway, off the coast, in the fog, all the way back cozy hotel room. Just in time to hear that crazy Nancy Grace wish us a "Happy Valentimes" from our tv. I typed that correctly by-the-way, she did say "Valentimes" over-and-over to the point where I gave Chup an ultimatum, "You must turn-off one thing: me or the tv."

Our stay was also enhanced by a couple trips to Max's for desert, a dinner with Chup's fine colleagues, a delicious salmon dinner downtown Burlingame and afternoons with that heavenly sphere: The Sun, which gave me enough light and warmth to finish The Road.

If you've read The Road, don't you think that this park on Embarcadero looks like a setting for the book?

If you haven't read the book, you should.

Anyway, that was basically our trip. I felt pretty healthy up until we were somewhere over Nevada and I had to heave in the plane's bathroom. Small space to vomit. But because Chup used his mojo and to get us nice First Class seats, the stewardess kept asking if I needed anything. "Anything?" "A cup of ice to nurse?" "A bundle of crackers with cream cheese?" "A PICC line?"

She was so nice, but she strangely reminded me of Nancy Grace. Which, as you can surmise, didn't help.

But all that ends well ends well.


(Or however that saying goes.)