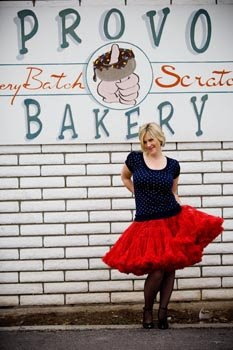 Lucky's photo of me in front of the Provo Bakery, pre-pregnancy

Yesterday I found myself conveniently downtown Provo. I was picking up my taxes, only a block away from the Provo Bakery, and decided to give in. To sin.

And as I was ordering the very perky and terribly cute bakery girl asked me if I liked being pregnant.

For a split second I paused.

I remembered that for five years of my life I honestly hated to hear women say that they disliked being pregnant. That was the worst offense. Even my own puking-seven-times-a-day-the-whole-pregnancy-sister-in-law Megan never complained around me because she was sensitive enough to know that I'd trade her trials in a nano. I also thought such a whine was a sin against womanhood. How could any female begrudge fulfilling the measure of the uterus' creation? I cheered on friends like ~J who said "My body loves to be pregnant." Was this not God's eager gift to all The Fertile?

And then I remembered how that very morning, like the last seven months, I had woken to severe nausea and puked in my hands before I could make it to the bathroom. My belly is too big to comfortably upheave anymore, but my body doesn't seem to take that into consideration. The most gratitude I could muster at that point was that I didn't simultaneously pee my pants like I normally do. I thought about how I don't sleep at nights, my back is sore and my hips vibrate with pain. If I don't constantly suck ice I get dehydrated and feel like death. Oh yes, and medication just makes me a loopy mess.

But perhaps worst of all, my doctor admonished me to "cut way back on carbs" after he looked at my peaking weight chart. And here I was in a bakery drooling for a donut.

"No, I don't like being pregnant." I finally answered her. And then, somehow I followed that up with,


That is my final answer.
Email Post
Labels: Baby Making