A Car Crash and An Argument 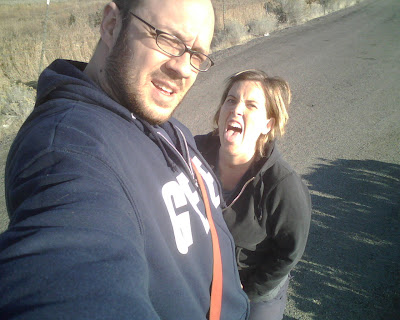 Sure, I post all the time about how wonderful my Chup is, and he is, wonderful, and I hope you don't doubt it. But oh heavenly jelly, today wasn't one of his better days.

First it started with a prayer, like it always does just before he leaves in the morning. I prayed that he would "drive safely" because that is one of those phrases that Mormons can choose from when they pray. After we said "amen" I had this feeling that he would be in a car accident, but I always have "feelings" and sometimes they don't exactly pan out.

After the prayer, I watched from the bedroom window as Chup, heavy with coat, charged out into the snowy morning. His car was buried in about ten feet of white fluff which he brushed off using a long handled-broom. I sent puckered kisses and waved him good bye. All very romantic and crap.

Ten minutes later he was back.

"The freeway was backed up both ways so I decided to turn around. I slid and hit a retaining wall. My bumper is ruined." I looked out the window and could see the left side of his car was indeed bumped.

Chup is a very mild-mannered fella, but when the guy gets frustrated he becomes unglued. I encouraged him to call the insurance and see what could be done. After pacing back-and-forth in the front room, I heard him on his phone explaining the situation to our insurance agent.

"I am just gonna fix it myself." He announced to me some time after the phone call ended.

All morning long I would occasionally look out the window to see Chup working away at his car as the snow continued to accumulate. (Note to self: We really like those three words together "continued to accumulate.") At one point I saw him with Super Glue, some thread and a piece of aluminum foil. But I've learned not to second guess, because by noon his car was pretty well fixed. Which is when I offered to buy him lunch.

I mean he buys me lunch, in theory, but because I do the online banking I know if he can buy me lunch or not.

We like to lunch at places that provide newspapers to read while we eat. We don't have that incessant drive to get a "moment alone" so that we can "talk" because all of our moments at this point are alone. And I talk a lot.

So there we were, reading and eating, when I mentioned the Bush v. Clinton (and Ross Perot, if you cared) election of '92. Chup replied that he remembered that election specifically because he was a missionary in Japan at that time.

Now we all know that Bush did not, in fact, win. I had to laugh. I did laugh. Not often does my bright husband make mistakes in his statement of facts. I relished, for a second, in feeling like the smarter one in the marriage.

"Why are you laughing at me like that?" He asked defensively.

"Oh! Because Bush didn't win." I laughed some more.

"I didn't mean Bush won, I meant Bush number one."

About at that point I stopped laughing. Chup looked really annoyed at me.

"No you are not." He said back looking serious.

This sort of exchange happens a lot with us. I am always quick to say sorry and Chup is always quick to say "no you are not." Something about all of it is so ridiculous that it sends me into the uncontrollable giggles. (Note to self: We hate the word "giggles.") It's hard to defend your apology when you can't stop cracking up.

He didn't forgive me until I took him to Target (he drove), bought him two new model cars (with his money) came home and made him cookies (chocolate chip).