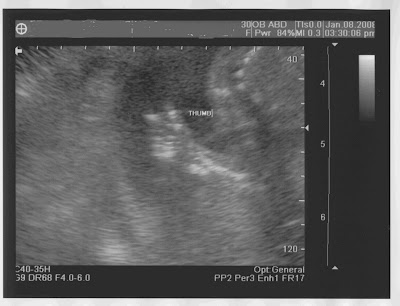 The Chief flashes us the ol' ancient virility sign

Chup and I went to have another ultrasound for The Chief today. What is with The Chief anyway? He made me so sick last night that I couldn't sleep. After some help with medication I awoke this morning thinking I was going to die. Not even kidding you. I called The Councilwoman and ~J and dictated my will. (Is will capitalized?) Anyway, I had to do it twice because "out of the mouth of two witnesses" and all that jazz. By-the-way May, I left my muu-muu to youu-youu.

Then we go to the ultrasound as conducted by my smarty scrubs cousin Katie. You get the reference to smarty scrubs right? Anyway, after a day of pregnancy sickness delirium (I am done taking suggestions--they don't work--but thanks anyway) Katie sticks her magical magnetic baton on my belly and the first thing we see is The Chief giving us the thumbs up, after which he proceeds to flex his biceps.

Anyway, I swear ultrasound techs are the most brilliant people ever. They should be running for president (instead of Mr. Huckabum) what with their ability to point out a grayish area on a blob and call it a kidney. And oh look! see that white line? That is the femur.


Do you think that The Chief will feel bad when he finds out that his dad fell asleep during his ultrasound? Anyway, Chup has been playing this PC game called Portal and you'd think that my very own portal would be far more interesting . . .

Anyway, after the ultrasound I had to have my blood pressure, urine and weight checked and so while the nurse was checking my urine I offered to weigh myself. She said "sure." So I did so forth and took a couple pounds off what the scale said (shoes were really heavy--Crocs you know). I don't feel bad either because the last time she weighed me she said "honey, could this be right?" and the time before that she said, holding up my urine sample, "Now lets see, what color is your urine? I've never seen that color before." And I just didn't need those sorts of comments today.

Anyway, after that I had a Bavarian chocolate cream donut from Provo Bakery.