In the Tree Tops 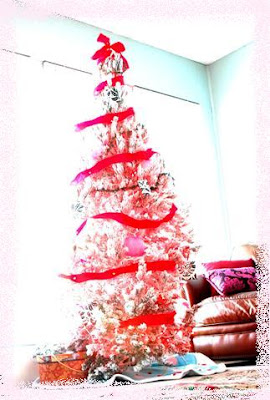 On Saturday we woke up to snow. According to me, this is a perfect way to open the month of December. Undeterred by the weather, Chup and I set out to find our Christmas tree at our favorite neighborhood tree lot The Baum's. It was early and we were their first customers of the day.

After a scrutinizing scan of every flocked tree available, we decided on a bushy tall one with some minor flat spots at the bottom. Then it was off to Kmart for all red lights on white strings. Oh how I hate Kmart! (Another post, another time.)

Back at home, Chup wrestled the tree through the front door using some grunting noises. With the tree in place, he proceeded to wrap all the lights around and around. I turned on How the Grinch Stole Christmas just for effect. That Cindy Lou Who just gets cuter every year.

When Chup's work was finished I adorned the tree with pink ribbon, green holly, and some more lanterns I made last month. Feeling proud of our festive Christmas tree, I sank back on the couch and gazed at our fine work.

That is when I felt it.

A feeling in my belly so funny it made me laugh out loud.

I started to wonder what produced such a fantastic--though little--sensation. It was like an internal tickle. It was like . . .

The third flutter was unmistakable. It was my baby moving inside me! It is that hardly describable motion of a four-inch-being rolling around in your uterus. I yelled to Chup in the next room and tried to describe what was going on.

"It it it was like this . . ." I stuttered on until finally I placed his hand on my belly as if he could feel it through my skin.

And so it was on December First of this year, two-thousand-and-seven, our baby became known as The Great Chief Flutter Foot, Lord of the Teepee, (or just The Chief for short.) This christening seems to have put-out the naming fires that have been blazing around here lately. Will he be known as The Chief in mortality? Maybe.

One thing is for certain, with his x-ray vision, I think The Chief was letting me know that he well-liked the tree too.