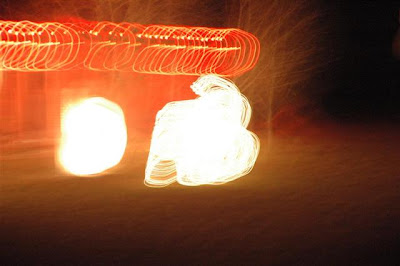 I like a rousing street of Christmas lights with neighbors who fall like dominoes to the holiday decorating spirit. Lyle gave us a "Humbug!" when we first hung our colorful light display, but the next night his obligatory angel was shining from the bay window. The following evening we watched as his sister-in-law Shirley displayed her blinking red tree across the street. And not to be left out of the family, Lyle's other sister-in-law Gail just west of us followed suit.

By-the-way, we live in the middle of The Extended Larsen Family Compound and they are not pleased when "the outsiders" beat out the rest of the family in either Christmas lighting or having the garbage can to the curb for Monday morning pick up. Seriously, on a daily basis we compete with several households just to carry on! It's like Double-Wide Survivor. Mad!

I don't know if it's my pregnancy hormones (first time I've used that excuse, thank you very much) but this year I am open to just about any and all sorts of Christmas decorating gimmicks. Where icicles used to bore me to ridiculousness (too 1990's) I now embrace them like my own. That also goes for colored icicles and Technicolor garlands and glowing fiber glass sculptures. I glory in inflatable whatevers (but most certainly enjoy the snow globes) as well as tacky nativities with creepy looking wisemen. And, of course this years newest craze, the LED extravaganza.

Chup and I like to drive around and critique. Then we converse with Lucy and Ric. After much discussion we decide if we give a house the "Circus" rating or not. Growing up, the neighbors up the street decorated their house with every knick knack paddy whack give a dog a bone. Even the Colonial American flag made a yearly appearance as well as a pack of American astronauts on the rooftop with Santa and Rudolph. I mean, that's the way I remembered it. After some time it became affectionately known as "The Circus" and to see it on display was like owning your own pink Cadillac. I guess.

As we drive around at night and sometimes see the half-ass toss of lights on a smattering of bushes I point and spout out the word "Attempt" in their direction. "Attempt" is not even close to "Circus" but better than "Grinch." If it lacks in tackiness it cannot be considered "Circus" no matter how show-stopping. Instead we call it an "Extravaganza." Mostly, as we pass neighborhoods, I yell out "Give it up to me people!" "Show Me What You've Got!" "Make It Work!" "More Pizazz!" "Let's Do This Thing!" and/or "I Own You!"

"I Own You" is the phrase these days, just so you know. It is what "Who's Your Daddy?" was about the same year that icicle lights were considered "delightful" and "quaint." "I Own You" is universally applicable . . . but mostly in sports.

You know what? I am going to hand out "I Own You" t-shirts to all the Larsen families on The Compound for Christmas this year. Because if you think about it, I kinda do.