"I envy people who drink - at least they know what to blame everything on." -Oscar Levant. 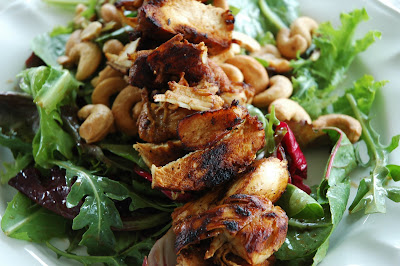 I've been feeling envious lately. It all started when I was making Chup this chicken salad the other night. I envied my sisters Page and Stephanie whose husbands are likewise vegetarians. I love Chup more than distilled water, but I dislike cooking meat. I feel it's too tricky, after all, no one ever got sick from an under-cooked piece of zucchini.

Meat on the menu requires that I run back-and-forth from the kitchen to Chup's office, fork in hand, with my other hand shielding the dripping meat like threatened birthday candle to be stuffed in a cake. It is hard to know if something is tasty without tasting it, is what I am trying to say.

Then Lucy brought over a bundle of cherry tomatoes from the farm. "Andrew and I just sit for hours popping these babies in our mouths." she bragged to me yesterday. I am envious that she gets to eat tomatoes (or any fresh produce) with her husband so casually. I love Chup more than BYU football, but I don't share his love of Doritos. We don't get to share snacks.

Snacks? What is that word? Snnnaaaackkks.

I am envious of people who eat pancakes without guilt, those who have read all the Harry Potter books, and/or those who have pools in their backyard. Let me expand:

I ate one too many pancakes at the Ward Pioneer Pancake breakfast. Just so you know, feeling guilt on Pioneer Day is horrible. You know why? Because Pioneers never even felt guilt and that is because it wasn't invented yet. That came later (approximated dates are pending, but it could have something to do with the feminist movement.)

And here is everyone I know enjoying Deathly Hallows and being all "I am not going to divulge the plot even though I desperately want to," meanwhile I just bought my latest healthy eating book. I mean, good for me, but my diet book has nothing to do with Ron Weasley. And the only characters who die are those who consume too much partially hydrogenated oils.

Last of all, I found the perfect house for me and Chup to move into last year. It had a large swimming pool. I imagined Ralph and I taking a dip everyday in the summer and then letting the sun dry up the driblets of water on my skin as I lounged by the pool. I love Chup more than an unexpected rainstorm, but he couldn't see the sheer value of having a pool (and a set of stylish sliding doors might I add.)

But I am not done.

I tried not to be jealous last night as Chup and I took Ralph for a walk. We stopped to chat to a young man in our ward about his latest excitements at junior varsity football practice. A couple blocks down a young woman came out to say hello as well. After we started to head home, I turned to see the young man and woman walking side-by-side flirting. I enviously wanted to flirt again in like manner. I love Chup more than pita chips, but we're married already. And my flirting hurts his feelings.

Even as I sit here at this computer I am envying those who got wear banana clips in the 80's. I've been wanting to own one for so long, but can't seem to purchase them anywhere locally (before I get a slew of e-mails asking if I am serious, I will just say yes right now because look what you can do with them. i.e. cascades of hair.)

Most of all, I am envious of my October-self who will get to see this movie. Why can't I be her already?