Chick and Me: A Story of Baptism 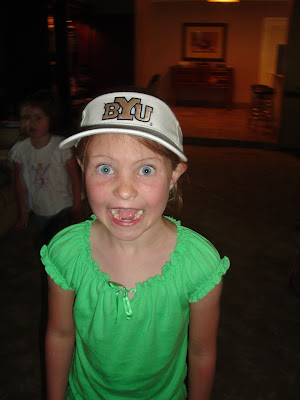 Chick was baptized this weekend. Her hair was in two adorable buns on each side of her head and her teeth were all in place. A bright turquoise sweater matched the ever-clever look in her eyes.

Chick was born while I was on my mission. Anytime a letter would grace my mailbox it would be all about the cuteness of Chick. Chick this and Chick that my letters would read. I wondered at times if anyone cared about me at all.

She was born the 12th grandchild, the fifth niece. There was no explanation for this enthrallment, I figured, other than the fact that this baby was beyond beautiful. Perhaps even an ethereal entity. So it was in a cold Canada that I decided I'd have to meet this Being and decide for myself.

When I arrived home and on the first occasion possible, I reached for the chubby faced cherub everyone had written about. Only she screamed ghastly horror at me. And things got worse in the following months. At family occasions Chick pleased the crowd by serving hugs and kisses to every single person in the room. Though, when it was time for "Aunt Courtney's hug. Give Auntie Courtney a hug! GIVE HER A HUG THIS MINUTE!", I received nothing but a daringly-dished terrible scowl!

It was comical. And wholly unchangeable. Unable to dissuade her daughter, Megan could do nothing but get a good chuckle out of seeing Chick have so much distaste for one person. My efforts towards my niece were thwarted by her snappy comments while I watched her angelic attitude grace the other members of my family (still to this day she does breathe a quick flame of verbal fire!)

Things followed in-like manner as the years went by. One time she told me about her "Favorite Aunt" list, which she read in descending order from Favorite to Not Favorite. Guess who was dead last? You got it. Me.

So I decided to wait for her affection.

Until finally one late Sunday evening Chick made an announcement.

I almost choked on my Sunday treat.

She liked me (sorta!)

Slowly I had maneuvered my way into Chick's grace. Though her quick-witted, snap-snappity comments didn't cease entirely, I heard less of them when I was in her presence. And scowls only on occasion. Oh the reward of patience!

And so it was on Saturday we heard a talk about baptismal cleanliness from Chick's other grandmother. She mentioned how great her granddaughter was, how sweet, how kind. And now that she was baptized she was clean from sin and ready to start a new life, even sweeter and even kinder.

After the ceremony there was a lovely luncheon at Chick's house. It was a perfect day with bright roses in vases, children playing whiffle ball and BYU mint brownies. I stole away for a moment to congratulate my niece. I found her playing with cousins and friends on the side of the house.

"Oh hello!" I said to all of them. And then, by a way of introduction to those who didn't know me, I said "I am Courtney. Chick's favorite aunt."

Chick scrunched her face up in protest, froze for a moment, then swallowed in a big gulping gesture of whatever it was she was going to say.


I think this baptized Chick and I are going to get along even better.