A Day in the Life of Kate: Alternative Commencement Organizer

One of the things that I love about blogging is receiving e-mails from readers. Last month an e-mail came from Kate, a recent graduate from BYU (English and Women's Studies.) She told me about how she was in the process of organizing an alternate commencement for BYU. Kate's e-mail was so interesting (she has a great voice) that I asked her to be a Guest Blogger for me when all was said and done. She agreed. Whatever your politics, I think you will find Kate's story intriguing. Kate, 3 things: Thank you. Congratulations. And what fabulous shoes to go with your cap and gown. 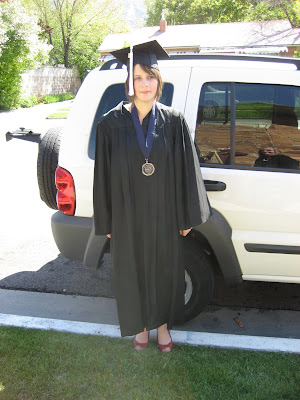 I am going to tell you the story the way I will one day tell it to my children.

When I graduated from BYU, my friends and I decided to hold an alternative commencement. We fancied ourselves activists, big idea people, people who felt sure they would change the world. We were good students and good friends. We considered ourselves devoted to our religion and to fostering a spiritual environment for ourselves. Of course, these are many of the reasons we came to BYU in the first place. We were not merely radicals trying to create “Berkeley East” at one of the most conservative universities in the nation (as they say, the reddest county in the reddest state). On April 26, 2007 I filed into the McKay Events Center at UVSC in my cap and gown with about eighty other BYU grads. I wore a pin that said, “Make Out, Not War” resting near the medallion I received for graduating with University Honors. I felt proud to be there among friends. Amidst several standing ovations and a downright intellectual fervor, I kept worrying about what my mother, sitting in the audience several rows behind me, was thinking of this event which she would later call “a peace rally, not a commencement!” I knew she would feel uncomfortable with the notion that most people in attendance were wearing jeans, and that by nine o’clock there was still an hour of speaking left to be heard from speakers she didn’t see as the heroes that I did. I wondered if she would understand why I was a part of this and why these things mattered to me.

For me, the whole controversy started with a phone call.

And I could believe it, though I didn’t want to believe it. I immediately called California Boy, my long trusted/long ago graduated confidante to tell him the Vice President was coming to our alma mater. He immediately suggested we call John Stewart and the Daily Show. Eventually they called us.

What began in my friend Ashsan’s Provo living room with petitions and concerned letters to the administration became a series of late night brainstorming sessions. When the idea to hold an alternative commencement was conceived, our first thoughts were who to invite. It just turns out that among the self-proclaimed “ecosapiens” with their compost piles, the wannabe homeopathic midwifes with their herbal remedies, and of course the feminists who are feminists and OK, we happen to have a Gates scholar who ate lunch with Ralph Nader one day. So we called him.

Pins were produced with catchy slogans in bright colors. A website was launched. Documentary filmmakers became involved, with release set for next winter. It becomes pretty weird to have two cameramen around every time you hang out with your friends. Sure, we’d be talking about Cheney and they’d be there, but we’d also be eating a regular bowl of Honey Bunches of Oats and they’d be there, or loading boxes into our cars (while wearing a skirt and heels, of course) and yeah, they’d be there.

My friends joined with others in BYU’s first political protest in 15 years to voice their dissent regarding Cheney’s visit. Days later, while still in negotiations, there was a well-intentioned press leak reporting that Nader was coming for sure. We had Pete Ashdown (former Democratic candidate for Utah Senate), Jack Healy (a former director of Amnesty International and a world renown human rights activist), and Ralph Nader (everyone’s favorite political scapegoat and self-proclaimed “unreasonable man”) all on the docket to speak to us.

Then we had to raise the money: $26,000. We began our fundraising efforts by putting our own money in a hat at the end of a meeting one night, a meager collection of what college students could spare. One of the main organizers donated $900 out of pocket to secure the McKay Center. Two of them signed away their lives on a $15,000 contract to bring Ralph Nader here on the prayer that somehow the money would be raised.

We all took different tasks. For many involved, it became a crash course degree in Public Relations. I called everyone I knew and sent out a those mass emails we all hate getting soliciting contributions. I met with old friends from high school, I met with local business men, I took notes of press contacts and likely contributors. We called editors and radio hosts, put the big ideas of networking and grassroots democracy to test. We sent out press releases and watched our story and other people’s opinions about it circulate. None of us have received our phone bills yet for the months of April, but I for one wished I’d had a more comprehensive calling plan when minutes used jumped into the thousands.

There was worry. There was anxiety. When you become involved in something like this you must ask yourself why again and again. It became emotional for people as their friends and families refused to donate or to participate and when hate mail littered their inboxes. Some saw favorite professors who had no or little sympathy for the cause as “talkers” rather than “doers” and in that sense, many heroes fell. One of my dear friends woke me up early in the morning with her tears. She was questioning her motives and even her own benevolence. She asked me if I would pray with her, and as we knelt in the dark that night, she begged Heavenly Father to help her, to understand why she was involved, but in the most imperative sense, to please help her to sleep as she had not slept in days. I wept while listening to her petitions to a God that others accused her of not believing in. I am not one to claim that God was on our side, or even that God necessarily chooses sides. I felt His love for my friend that morning, and I felt humbled by her outpouring to Him. My friends have inspired me to be a better person, a person who strives to both think and believe. You may not believe me, but I believe they try, as good Latter-Day Saints, to seek the Spirit. I have done something dangerous in saying this. I have mixed political and spiritual themes. Please forgive me if this offends you. Some people called us brave or said that we had courage. Maybe facing those moments, those lonely existential moments, is the real reason why we could consider ourselves such noble adjectives when we later think upon the events.

If anything, this process made all of us think. Several nights I drove back up to Salt Lake between two and five am bleary eyed and weary after an eight hour analysis of what I could do, on a personal level, to better America. That’s been my argument since before I “entered to learn” at BYU. When people wanted to label me as “liberal” or “radical” (dear CJane readers, I am not above fearing your response) I simply asked them, “Do you love America?” And they would say yes, almost every time. And I would say, “I love America too. Can we please just be friends?” In AshSan’s speech at alternative commencement, she said she was standing there because she loved BYU, and even now many people question that. I believe we can criticize something we love in the name of improving it.

Then the day came. I felt emotional at my luncheon as I clapped for my parents and professors who made possible my college education. I felt emotional as I remembered what it required for me to graduate, and then I cried discussing with my parents what I felt it meant to be a revolutionary, how I felt that with this whole alternative commencement, I was part of a community of BYU students both past and present that often felt lonely in their views. I cried as
I had many times before about that loneliness. 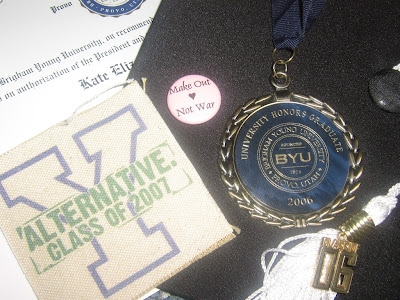 That afternoon I drove while listening to the broadcast of the event (past Cheney’s motorcade actually) to load materials into my car, to print out speeches, and to write a speech for one of our organizers who hadn’t had time to sit down and put much together. He handed me his journal with the promise he’d take me out to dinner, and I went to work gathering statistics and trying to make my writing style sound like his speaking style. At the event itself, I felt most nervous when he stood up to read what I’d written for him. I felt grateful when he adlibbed. I worried that the statistics I’d gathered with a mere hour to research would be incorrect. He received applause, and I felt relief.

It felt good to stand on my feet clapping boisterously for my friends and our combined efforts. More so, it felt good to open myself to inspiration for a few hours, to think about my own personal and political commitments, the promises I’ve made to myself. Pete Ashdown said there was nothing more virtuous, lovely, or of good report than peace. Jack Healy told us that the real issue of human rights is protecting the ones we love from harm. He said this having comprehensively witnessed atrocities such as rape, murder, betrayal, abuse, death, and disease. Even if my mother disagreed with other things he said, I thought that might reverberate with her: she kept me and her other four children safe, she committed her life to that cause. While Ralph Nader spoke on issues wide and varied (from childhood obesity to corporate crime) he emphasized again and again the importance of building strong communities. We talked about efforts towards peace, but are those efforts towards peace not an effort towards Zion, that ultimate community, the kingdom we commit ourselves to build? When I think of the future, I cannot help but think of the children I will one day have the privilege to raise. How will I show them what matters to me? What will they say of their mother? I want them to know that I privilege free speech, democracy, and justice. I want them to live seeking out service, sharing their talents, and finding ways to nurture and build those they meet. I want to foster in my children a sense of hope, if anything else. I want them to look at me, their mother, and see a person who knows where she stands and why she’s standing there. Perhaps this is what it means for me to be an example. I am hopeful. This is not a trivial matter.

Ralph Nader left that day one week ago with a question that I will turn around and ask you, a question I plan to ask my children when they reach the proper age:

“How will you keep your life from becoming trivial?”