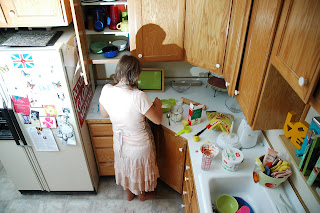 Five years ago this month Chup and I were considering marriage. Prone to want to be married and care for a man, I was ready for wifehood. After Chup was hit with a proverbial lightening rod of confidence outside of bachelorhood (he was thirty) we eloped.

For the first month of our marriage we rented out the other side of Nie's duplex- a very old house in Provo, which badly needed some source of cooling in July. I spent most of my days hanging out with Nie, being Claire's part-time mother, and waiting for school to start so that I could be busy teaching again. Chup was hired on for the full month (of 18 hour days) on a movie set that maybe you've heard of, "The RM" in which he also plays the "Tow Truck Driver"-a part he relishes to this day.

When the movie was done shooting we settled into a beloved condo just off Grandview Hill. It had a balcony with a view of the valley. We could see all the way to Spanish Fork Canyon and the beginnings of storms from the south. I am afraid that nothing will ever suit us as well as that little condo, but a man needs a lawn and a woman needs a flower garden.

I took the cue from the moment we moved in on the third floor to start cooking. I strapped my apron on night-after-night and spent dutiful time in the kitchen making three course meals. I liked to cook anything vegetable-based and throw in rosemary and pine nuts when my mood called for it. Though I wasn't thrilled to eat meat, I cooked it on occasion, careful to spice it up with slices of lemon and orange sauce. No food conceived in that kitchen went without a flare of some sort of spice. We weren't going to be (gasp!) ordinary eaters.

When my food was well-cooked I'd take my apron off to reveal my clean attire and call for Chup. Our dinning table was placed in front of a huge window, and if we were eating late, we could see the lights (and sometimes fireworks!) of the town.

Everything was lovely until the day Chup broke-down with a confession.

Chup is a mystery. Sometimes he is the most cosmopolitan man I know. He reads, researches and understands concepts that are years ahead of the average consumer. He is well-versed in literature and philosophizes about cinema with his film-making friends. Fluent in Japanese, he can explain the traditions and history of every item on a sushi menu. He scoffs at tepanyaki. He can be a horrible intellectual snob.

But he's also from Twin Falls, Idaho. Which makes him one-step away from Cowboy. He is fluent in Ranch and can spend countless hours inside of his garage taking a part machinery and revolutionizing it for better results. When we go to visit his family, I catch him cutting off his verbs, so that "turning" becomes "turnin". It was the biggest shock of my life when I discovered this duality. I was confused, I am confused, but I love him and if that means watching him buy a '72 Blazer, complete with a lift kit, and hack off the top to go "diggin" in well, then that is okay. (gulp!)

"I really am just a meat and potatoes kind of guy. I hate vegetables, except carrots." He confessed to me--tenderly--though exhausted.

Those words sunk in my stomach. I was looking forward to turning Chup vegetarian, and even maybe vegan if I played my cards right.

The emotional havoc this caused inside my soul was enough to turn to earnest prayer. How could I change my vision of our family's culinary charter? Carrots are the worst poseur vegetable, practically a fruit. And, add to that, no more rosemary. Have you ever had scrambled eggs without rosemary? C'est tres tragic!

I don't recall where I was when the answer to my prayer came, but I remember that I was given a vision. On my white counter top there was a gallon of sour cream, three chicken breasts and a crockpot. No spices, except salt, were visible.

"Cook whatever he wants." Said a voice.

So for two years I strapped on my apron night-after-night and cooked nothing but Mormon soul food. I even scouted out several Relief Society cookbooks. There were pot roasts and lasagnas with cheddar (double gasp!) cheese, followed by cakes made from a box with frosting out of a can. I cried every night, gained twenty pounds, but my Chup was so happy.

Slyly though, from time-to-time I'd "forget" to buy tomato sauce from a jar, and have to make it homemade from my collection of fresh tomatoes. When Chup didn't notice, it'd give me courage to do it again.

Shortly after we bought our home and moved in, MD and Kentucky moved across the nation and Chup was called to active moving duty. While driving eastward, he repeatedly ate at a place called "Shake 'n Steak" and though it was good old American clot-causing food, I think he started to miss my cooking. Somewhere in Lexington he stopped by a bookstore and bought me a Vegan recipe book called "The Accidental Vegan."

It was a most-anticipated blessing.

We started to cook together, me with my apron, and Chup with a dishtowel flung on his shoulder. He would do the pilafs while I would temper the curry. I'd make him chicken and he'd make me brown rice. And when Pinkie Pie came along, every desert was homemade.

A couple nights ago I ran out of my own vinaigrette and had to douse the salad with something from the store. I thought Chup might appreciate this oversight. But when he finished his plate of salad, he put down his fork and whispered in my ear,

"I like your vinaigrette so much better. Can I pick up some balsamic the next time I am at Wal*mart?"

I nodded, liking the duality of my husband a little more each day.

Garlic salt the roast and place in crockpot.

1 (10 3/4 oz) can of cream of mushroom soup
1 package dry onion soup mix
1 (10 3'4 oz) can beef gravy
1/2 cup brown sugar
3 tablespoons vinegar
2 tablespoons soy sauce
1 tablespoon Worcestershire sauce
Mix together and pour over roast. Cook on low hear for 12 hours or high-heat for 6 to 7 hours. Take roast out when cooked. strain gravy to get rid of lumps, and thicken with cornstarach and cold water mixture.

*********************************************
SHOULD YOU WANT AN OPPORTUNITY TO SHINE: I'd like to post as many pictures of people in their aprons for an Apron Week Grande Finale. If you'd like to join in, please e-mail me your photo(s) at my brand spanking new e-mail address (Hotmail causes me Hotflashes, I should've left them years ago, I know) at cjanemail@gmail.com. Also, please include the history of your apron, like where it came from and how it was lucky enough to have you.

(Scroll down for a fabulous In-box Announcement)

My creative cousin Nanette created the Utah Art Market which features local artists and craftsman. It was started as semi-annual event at her home in Salt Lake. It's now put on four times a year, and features tons of beautiful things (including designer cupcakes). It' fun to go with friends or sisters, but don't forget to buy something for Mother's Day.