The Horrible Night of c jane and Chupastar 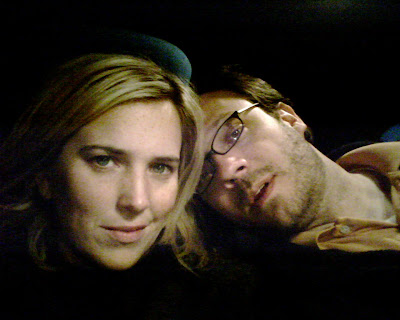 But not last night. Let it be known that last night Hell's Circus came to town and stayed until I could hear the little birdies outside my window. And when that happened I was so eager to get out of bed that I STAYED out of bed. Missed the nap and went straight for my first game of Tetris (I am an addict, but admitting that is Step One, no?)

Chup and I have been fostering a bad habit as of late which is sorta a pun because be we've been staying up late lately. We play Skip-bo, eat chips, IM each other from across the hall, watch Letterman, eat more chips, spend time online reading The Drudge Report (me) or Boing Boing (Chup) and rating my Father-in-Law's forwarded e-mails. There needs to be a help group for these e-mail forwarding people and I should know, because, as admitted to before, I am a Tetris addict (Step One again.)

So by the time I went to bed last night it was (Dan) rather late. I feel asleep in an awkward position, my head pointed due south like I was staring at my belly button. Sometime after that I had my first blogging dream. Not long ago Meta wrote about a blogging dream she had (and if you don't like orgasms then don't read it and/or get help.)

But this dream! This dream was so scary. A crazed cjanerun.com fan of the female variety found out where I lived and came to my house, knocking my windows out and yelling at me. Why would a fan do that? Brave-like, Chup went after her with a yellow whiffle ball bat (his weapon of choice) and she went ballistic. Helllllp! I was so terrified!

When I woke-up my throat was dry and my neck hurt like a micky-ficky.

I re-adjusted the pillows and re-started the doze factor.

A couple hours later my bladder woke me up.

Then there was a dream about meeting a friend in New York, only to have the place attacked by crazed men of the PLO variety. (More people needing help!) When I tried to scream and nothing comes out I opt out of the dream.

After checking my lung capacity, I fall back asleep. Deep, dark sleep the kind that only babies . . .

"What are we doing?" Chup is pinching my thigh.

"What?" I asked over-annoyed, confused.

"I said, what are we doing in this bed?" Chup is all crazy-eyed.

I pause. What is going on here? I look around and see Chup intensely propped up on his elbow with his face a couple inches away from my own. He is breathing in heavy and still pinching my thigh. He has got to calm down.

So I grab his face with my two bare hands and demand, "STOP IT!"

He sniffles, releases the pinch and looks like he is going to cry.

I change my tone, "You are asleep my love. You are dreaming."

Bladder wakes me up again.

Chup's text messaging alarm goes off. It sounds like a fire squad of digitalized human-body-produced gas. (I once read a book with the description "lusty farts") and I wonder who could possibly be texting at this hour. I hate them.

The birds come and sun is poking in and out of our blinds. It is over. I get up and empty my bladder for the third time. Where is all this liquid coming from? And in case you are thinking it, I am not pregnant.

But I did once read a book with this description: "lusty farts."

Oh. Did I already tell you that?