A Pink Kitchenaid and a Yellow Kidney Stone 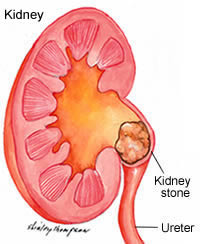 A few of you might be wondering about my Holidays so far (thanks for the concerned e-mails) and I thought I might dish out what is on my plate:
Dec. 23rd- My blogger kin, The Jolly Porter and Oh Judy are assigned to the live nativity at the family party. This involves approximately thirty children. Mary and Joseph are precious. The white-clad host of angels are divine. The shepherds sincere, the wisemen exotic. And surrounding the new baby is a zoo sampling of curious animals--all outfitted in stuffed once-Halloween costumes--including an alligator, a red toucan and as far as I can tell, Gus Gus from Cinderella.
Later, after our waffle bar with homemade chocolate and pear caramel sauces, Chup complains that he ate too much.
Dec. 24th- Chup and Christian stay up late putting together pink and white bikes for Claire and Jane. (Don't tell Claire and Jane, they think Santa just dropped them off intact.) After a succulent dessert party at the parents of my best friendest Wendal (one of my favorite traditions) Chup complains that he has eaten too much.
Dec. 25th- Chup spoils me yet again. A pink Kitchenaid, a Gone With the Wind dvd set, Pride and Prejudice dvd set, earrings, clothes, the new Damien Rice cd, pajamas! (I could be here for days Terri!) That night we invite my parents and Nie's family over for a traditional Japanese dinner. Curry, yaki soba, and fresh crab sushi. Between nuzzling fat baby Nicholas and dipping rolls in Chup's sushi sauce (a tich of wasabi) I decide it's the best Christmas ever.
As you can predict, Chup eats too much and complains well into the night.
Dec. 26th- The sun is shining in my bedroom and I don't move for an hour as it smothers my face. Chup wakes-up complaining of a side ache. We drive to Idaho. His side ache gets worse. Kentucky and I stay up late solving the world's problems (somepingbody has to do it.) (You are welcome.)(Just for the record, Yours Truly did most of the solving, Kentucky mainly just played tennis on the Wii.)
Dec. 27th- We decide Chup is passing a kidney stone. It hurts. It hurts. It hurts. It hurts me to see him hurting. My nephew Phun, walks around singing "I love rock and roll/put another dime in the jukebox babah!" I run to Barnes and Noble to buy a calendar.
Dec. 28th-It's 9:12am Idaho time and I am trying to decide on concrete resolutions for the New Year. I don't have a good feeling about 2007 by-the-way, and that is no jinx. Maybe my resolution should be more like Pollyanna. Do you remember when the old lady grabs Pollyanna's face and says "You've got a crooked little nose."? Rude. Senior Citz are rude sometimes. And if you think that my New Year's Resolution is to sprout and grow empathy in my soul for Senior Citz then you are just wrong. Wrong. Wrong. Wrong and not right.