When Heaven Grants Prayers For Fun 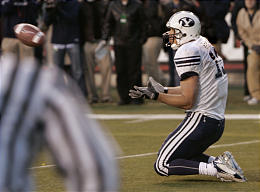 Chup left me to watch the BYU vs. Utah game alone. The Cougars had scored two effortless touch downs in their first two possessions. I was yelling something about a "walk in the park" and shielding my eyes whenever Coach Wittingham's face appeared on the big screen. Coach Witt is a good coach, but I have some issues with the man that may take some time to resolve. Therefore, I don't like to watch him during live TV. Especially when I am exhaustively trying to pull out all my good Karma for a Cougar win.
I don't have a hatred for the Utes. I went to the University for a whole semester and had a good time. I would have stayed longer, but I was called on a unplanned mission to Montreal. When my brother coached at the U I cheered for them ever so slightly less than I did for BYU. I was happy for their successful 2004 season. It worked out well for my brother who left the Utes the next year and sold his BCS Fiesta Bowl Championship ring to someone who cared. For a tidy sum too, I might add.
I also really like Eric Weddle who essentially is their whole team on either side of the ball. This time I just wanted the Cougars to play like they have all season, which is domination of a lesser athletic conference, but digression is oppression and I shall stop.
No sooner had Chup closed the massive garage door did the Cougars come un-glued. Our offense couldn't produce a play and our go-to-guy Curtis Brown couldn't get down the field with the ball in possession. The second quarter was all the Utes.
At half time I got in the shower to divert the feeling of doom that had shrunk my hope to a small pea-sized particle in my heart. Will the Cougars lose to our rival for five years continuously? What emotion would capsize the rest of the afternoon, evening and ultimately weekend?
In the third quarter I stopped watching. Leaving the TV on so that I could hear the silence or screaming of the crowd, I started to pack for home. I folded laundry and heard roars only somewhat louder than the thumping in my rib cage.
Chup came home well into the fourth quarter. BYU was down, with less than a minute in play and needed a miracle touchdown to win. For the first time all season Chup was fully invested as I watched his hands get shaky.
I left and went outside to watch the sunset.
And I know that I wasn't the only Cougar fan praying at that moment.
I made a promise that if the Cougars could pull off a victory...well, I'll just keep that promise a secret for now. Just know that I do intend on keeping it. I mean, I have to because just as "amen" escaped my lips I heard a collective cheer from Chup, Honey and Ringo which was birthed from the family room, swept out across the hallway, found me in the backyard and leapt out across the canyon to echo for me to hear on the natural replay.
We won.
Chup came running out and picked me up in his arms. TiVo showed that last eternal moment when Beck finds Harline in the end zone for the touch down. I jumped, screamed, ran-in-place, jumping jacks, sang, cheered and ultimately wiped the tears.
Later, I called Andrew who was still at the stadium.
"It's surreal. Wish you were here." He said. And if you never get to hear your brother crying because his team just won the game of a lifetime then trust me, it's why I agreed to come to earth.
The hot chocolate from the BYU dairy on a cold autumn night at LaVell Edward's Stadium probably tempted me as well.

That is if you can be tempted in heaven.


Congrats to the Cougars, and most especially from me, to the hard-working Coach Clark and his ever-present coaching of the o-line from the booth. Viva Las Vegas Baby!
Email Post