Love Letters From the Men in My Life 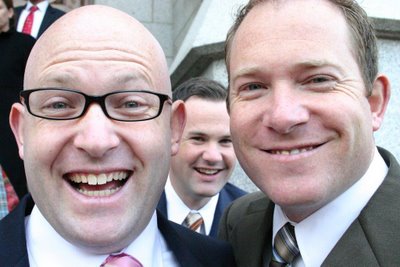 Topher, Jesse (Jiss), and Andrew (Lin)
This photo was taking by my lovely sister Nie.
Yesterday was a good e-mail day for me. It first started out with an avatar postcard from Topher which included his autobiographical cartoon portrait, and this little note: 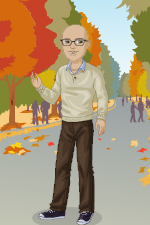 Hello, Cokey!
Since you still have a Yahoo account, I thought you might take a look at my very special avatar. What do you think? It's a dead ringer, eh?
I think you should make one as well. Then you can send postcards like this.
Love, Christopher 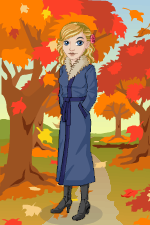 Mine's not as good as his. I am just telling you in case you've never seen the both of us. My eyes in this avatar came from some distant alien planet. In real life they come from my mom's side of the family. "Petite eyes" I like to say.

And for the record, that is FAUX FUR, Pamela.

Chup also has one. I am too embarrassed to publish it here. There are yellow rubber boots involved. If this were real life, I don't think my alien avatar would be interested in his avatar because she would know that on this planet, men don't wear yellow rubber boots, unless they firemen. The same thing goes for suspenders.

Then it got even better when an e-mail came from my youngest brother Jesse. We are eagerly awaiting the 6:00 kick-off of the BYU vs. Wyoming game tonight at LaVell Edward's stadium (LES). We have four front row seats on the 40 yard-line and infront of those seats is a large concrete step for visitors to sit. It's prime. I've watched many a game from that step. The opposing team is only about ten feet away from you. And tonight I intend to dish the Cowpokes up some Righteous Hell. And yes, there is such a thing.

Note: He includes a line about "pre-game roast beast" which is the chunk of meat my dad prepares at every tailgate party. The same savory roast that Chup married me for (honesty=best policy) :

The punctuation above, specifically this ) : was NOT meant to be an emoticon. I don't believe in emoticons. Clever, true. But not for this emo-atheist.

1.If you could hie to the LES on a chilly night in fall
And then continued inward where the Defense swarms the ball.

Do you think that you could ever, through all eternity
Find a better place than the LES where heaven ought to be

2.Or see the grand beginning when the LES did not exist
Or the first game that was witnessed or the last one that was missed

Me thinks that it would never, in all the very least
Kick off the celebration without the pre-game roast beast.

3.The works of God continue, as we crack the top 25
with Improvement and progression the LES will come alive

5.Its the day before the big game, and I cannot concentrate
The game begins at 6:00 bells and we better not be late.

You can come sit on the first row but there will not be a seat
So you better bring a blanket 'cause you'll be sitting at my feet.

Up to the challenge, as ever, my older brother Andrew shoots back another e-mail and requests that I judge the best of the two:

Twas' the Night Before Kick-Off -by Lin Clark

Twas' the night before kick-off when all thru the house, Lin's duckets were calling, from the envelope they came out. The duckets were hung on the refrigerator with care, with visions of Fui, Curtis, and Harline through the air.
When Lin in his jammies made from the gap, had just settled down for an 8hour pre-game nap. When all of a sudden my dreams turned to the feast, what if the Tola forgets the the tailgate roast beast? When what to my wondering eye should appear but, Cowboy Joe Glenn and 60 necks riding a steer. This had to be a dream, "Powder River Let her Buck" then Lin came off the ledge and remembered the cowboys really suck. Back to bed I went my dreams gone in a whistle, calmly I remebered that Jo. Becks right arm is hotter than a pistol. So tomorrow don't panic, don't worry, don't fright. Dream of the Les, the glory, and the game under the lights. I know in my heart ranked 25 isn't enough. Just cheering at the LES with my brother Jiss gives the cougar game all the right stuff. But I heard Greg Wrubel say to Mark Lyons wednesday night, Happy Cougar Game to all we'll see you Thursday night!

Well, what one would you pick? It's a toughie. Of course, if the Cougs win, we all win.

Next a response from my father who won a very tough (sarcasm) hard-fought (more sarcasm) race on Tuesday night. Here are the official results I think you'll agree that is was a knuckle biter:

You sweetheart. You are the only one to congrat me.

What is this world coming to when a man wins a re-election and NOBODY CARES? Benji Franklin would not approve and neither would Richard from Old Richard's Almanac.

Just when I was hearing the violin strings soundtracking the fullness of my e-mail joy. I found this treasure awaiting my read. This is from MD, my sunshine brother-in-law, whom I blog about often because he pays me ca$h. He says it will "help his practice" and promote "sense in the medical community" and other stuff that I tuned out.

NOTE: MD is a Guitar Hero Master who has been eagerly awaiting installment 2. He pays tribute to me and my wizdom. I didn't pay him. I also didn't ask for his right-to-publish permission. That's how I work:

I would just like to take a moment of your time to bear my testimony about Guitar Hero II. This morning I went to Wal-Mart bright and early to get my copy of the game. The clerk informed me that their shipment had not come in yet and I would have to return later that afternoon. I was distraught brothers and sisters. I have had a few trials in my life, but this one was proving to take its toll. I walked past the rolled back prices on two for one antiseptic wipes and ignored the elderly gentleman in the blue vest wishing me a good morning as I left the store. As I stood in the parking lot I felt totally alone. Well, not really alone, because some thirty something soccer mom ran into me because she wasn't looking where she was going while she was talking on her cell phone. I walked back to the car not knowing what to do next when I received a sign. My head was hung low, so as I approached the car I was looking at the tires. A round object w/ two inter lying concentric circles... it could mean only one thing. I was being guided to Target. I have doubted Target in the past, but never again. They had guitar Hero II and I was quickly back on my way home to experience the joy of Axl, Mick, Steven and the gang as I rocked to over 50 classics on my small but sturdy plastic guitar. I have tasted of the bitter fruit of wal-mart and I shall not return. c jane, I should have listened to you all along, I have returned to the fold. Target is the place for me, I shall wander no more....

Bless you MD. May the peace of Target rest upon your soul and make you whole, I pray.

Now excuse me, I have some replying to get to. You understand.