The First Day of Snow In the Valley 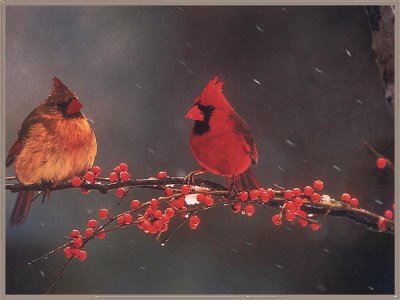 I had just settled down to get some things done at my desk when Chup came stomping in.
"We've got to go!"
"Where?"
"Close on our house!"
Somehow that small detail of refinancing slipped out of my head. I am usually the one that remembers appointments and details.
There was no time for me to shower so I pulled a sweater over my head and grabbed my Indian-influenced jeweled slip-ons.
"Are you ready ready?" Chup asked as we rushed to the car. And then, upon further inspection, he said "Your hair is not ready ready!" and was kind enough to smooth over a bumpy part in the back.
Going over the viaduct offered us a panoramic of the mountains shrouded in clouds.
"They say it's supposed to snow today." I offer this information knowing that Chup disregards the theys in our society. My Chuppie wouldn't trust a weatherman for a gambling partner.
But by the time we reached our mortgage company white flakes were smacking against our windshield. I had to call my brother Andrew, one of the few people in my life who delights in the first snow as much as my little heart does.
First Colony was playing Christmas music. It was a Jingle Bells-calypso style and very loud too. I suddenly felt queasy. When Paul came to great us I demanded an answer.
"We always play Christmas music on the first day of snow."
What is my policy on office traditions? I wondered.
It was a slight blizzard in Orem. We signed exactly 156 papers and I noticed that my signature needed some umph. Chup has a movie star squiggle. He kept looking at his watch for the date. Finally Paul started to remind him.
"It's the 25th Dude."
Cami at the Title Company knows Larry King. Chup explains that a clip from his Discovery Channel movie will be airing tomorrow on Larry's show.
"Larry is so funny!" Cami giggles. And I remember how the absence of eye liner makes me feel naked. Also, I noticed that Cami's hair is ultra-straight and various shades of yellow and mine is bumpy. I want out. And I don't want a drink. I don't want to be offered another drink. Yes I am sure and no I don't want your secretary's cookies just get me out of this property owner's hell.
Chup can see he needs to intervene. Target is down the road though we can't see it through all the shedding of the clouds.
I didn't want anything at Target, but I took an offer from Cafe Rio.
Chup dropped me off at my mom's house so that Stephanie and I could spend the day together. She was astounded that my Target trip ending up barren.
"It's the theme of my life." I said without enthusiasm.
Jane helped Steph make a short-lived fire. When you live in Arizona you don't have the same experiences as a typical Utahan: a want of fire in the place, a desire for hot chocolate and a first of the year snowstorm. So we lived it up and The Councilwoman couldn't resist allowing Celine's Christmas cd to spill out of the speakers and dominate all noises in the house. I know it's wrong of me to love that cd like I do.
"Feliz Navidad!" She screams.
One thing about the East side is it's consistency during a storm. When the day is stormy it stays stormy. On the West side you will have a super cell blow down your house and two hours later you are in your bikini helping the neighbors pick up debris.
The snow is falling heavy outside my parent's bay window. Sister-in-law Suzanne shows up with remnants of Taco Time. We both agree, the TT has it going on. And we both know what it is. I hand the baby off to Steph and try to resurrect the fire.
"You are smothering it." Steph advises. The fire chokes and spits. I get the blower in the basement. We would make horrible pioneers, though Steph wouldn't think twice about birthing a baby in a bed of posion oak off the battered trail. I would be a bumpy-haired pioneer and Chup would have to carry me most of the way.
Ollie and I have decided to be the best of friends. He is so cute when he says his own name "Ollie! Ollie! Ollie!" Chup calls him Cheeser on account of his show-stopping smile that actually looks like he is trying to push cheese from the roof of his mouth through his teeth with the use of his tongue.
Soon it's time for me to go home. It's still snowing and when I get home Chup is doing the dishes. He has the pumpkin lights turned on and the house feels so cozy. Although his signature is sweeter than mine, I really love my husbandal roomate.
Not long after that I join with my ward friends at the temple. The sun is setting in the west and the snow is now a drizzle. Hours later we come out to see white on the temple grounds--evidence of a hard day's work at precipitation.
When I get home again Chup curls up on the couch with me and watches Justin Timberlake perform on Jay Leno. Having seen him do his thing on David Letterman a couple nights before I can't get enough of him (never a previous fan.) Not wanting JT to show up in his house, Chup gets up and starts to beatbox while shaking his hips. The former N*SYNC pretty boy no longer looks cool. I am hoping that Chup likes girls with bumps in their hair.


And suddenly I remember that it's time for bed.
Email Post