ChEErs To The BYU RoMaNCe 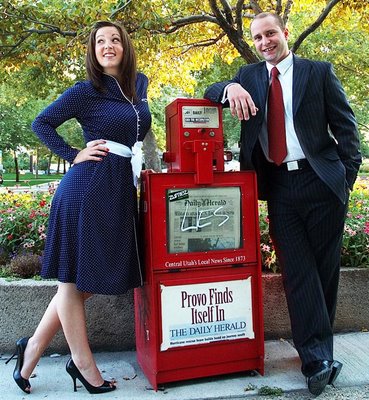 Yesterday I drove through BYU campus to get to my parent's house. Campus looked like it was supposed to in the Fall semester of a respectable college. Everything was of the autumnal palate. Students were walking around with heavy loaded backpacks. Yellow leaves like confetti, were scattered everywhere. The sky was a mixed variety of grays and blues. Guys in heather gray t-shirts jogging around dodging people and cars. Girls on cell phones. The mountains stood ever-providing a glorious back-drop.
Turning on to Ninth East I saw a couple crossing the street by the Creamery, holding hands and eating ice cream. In high school the very same scene would've made me nauseated. I would pray to the Gods of Fate and Virtue that my story would never include BYU, the Creamery and romance all in the same sentence.
But yesterday, oh yesterday it was the sweetest moment of my 24 hours.
I wondered, at that moment, how many Zoobies were eternally falling in love?
How many were at Helaman Halls preparing Rice-a-Roni hoping that HE would just stop by in time for dinner?
Was there a couple at the candy counter at the bookstore discovering each other's sweet-tooths?
I thought about the couple that just got married in August and moved all their wedding gifts, some still wrapped in white paper, into their first little apartment South of Campus. She works at Brick Oven, he cleans the Law Building at night.
Of course, this would never be my story. While Chup went to BYU and dated and went to firesides and dated, I was at UVSC, or the University of Utah trying to figure out what romance was like without ice cream or FHE.
By the time I arrived at my parents home, I looked across the street and gazed at the house where Chup lived when he was going to the Y. If only, I thought, if only I would've known that only yards away lived my destiny. We could've run to the Kimball Tower on late stormy nights and watched the International Cinema. Maybe grabbed a Jamba Juice and chilled at the Wilk.
So cheers to you those who found romance at BYU.
Share your story with pride!
And don't forget to mention the color and style of your Doc Martens.