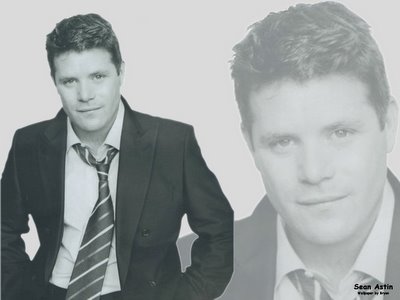 Emily,
I know that I spend a lot of writing space on my blog dedicated to the many, many, many times that I am picked-up upon (give an old lady her dying wish...) BUT
It happened again.
This time Chupastar VOLUNTEERED to guest write this post.
Read on...

So, a couple of days ago my friend R.L. called me to see what was a-goin’ on, and invited me stop by and check out the set of his in-production film “Forever Strong.” This is the so-called “rugby movie” that you may not have heard something about. I hadn’t seen R.L. in awhile, and exactly half of all the people I know in the world are working on the film so…..

Pause to mention that I and the Janer had the previous day run into Cotton in the breezeway of Macey’s. As we blocked shopping cart traffic, she detailed to us the account or her meeting afore-mentioned film’s leading man and numba-one-soopa-star-power-attraction -- Sean Astin.

Go ahead, take a sec to IMDB him. Besides remembering him fondly as Mikey Walsh from “Goonies,” you may lose a tear thinking of “Rudy.” No? Then howzabouts Samwise Gamgee from Peter Jackson’s instant trilogic epic “The Lord of The Rings?”

Anyway, it seems Cotton had worked herself into a mighty dither earlier that day when she went (under the guise of visiting her Set-Dressing husband Ant,) to set to meet Mr. Astin. Now, understand that there are few bigger “Rings” fans than Cotton. You will then understand the trepidation with which she prepared for said meeting. I’m sure it went just fine, but as Cotton related to us how her make-up wasn’t quite right, and she was “all goofy,” I found myself thinking “to some people, Sean Astin is a really big deal.”

Not so much to me really, but just you wait.

…I told R.L. I’d swing by set tomorrow. Ends up Janer got home the next day the same time I did so I axed her if she wanted to come along. “Shore.” She says, and we were off.

We weren’t there five minutes, when in the midst of introducing my wife (that day especially cuti-fied in her vintage dress and rubic’s snake puzzle bracelet) to thousands of people I talk about a lot yet whom she’d never met, she says to me, she says: “Sean Astin looked at me, twice.”

Completely understandable. She looked good. Perfect for visiting a film set with lots of hip people but in a totally different than them yet not over-the-top totally hip sort of way. My friends thinking: “Her? With him?” sort of way. MmmmmHMM sort of way.

But I didn’t think much of it. Cute girl on set, hard working actor….of course he’s gonna look. And Janer was probably one of the only women on set NOT taller the him. Maybe.

So, I kinda brushed it off, and we sat down in two chairs right outside the room the were shooting the scene in and watched for a few more minutes. Then I was ready to leave, so I stood up to tell R.L. we were going to take off, and what do I see when I turn back around?

I’ll tell you what I seen, I seen Mr. Sean Astin walk directly out of the room straight to the chair I had just been sitting in. And sits down. Next to my wife.

We’re not talking a meandering, feel-it-out sort of cautious approach here, I’m saying b-line. As in bee to honey. As in stink to poo. That’s what I’m saying. Pre-meditation, friends, evidenced by the first words out of his mouth.

Jane: Nothing, what are you doing here? (admittedly, not the snappiest, but wait for his next…)

So at this point, R.L. comes up, sees/hears the sweet, sweetness and sees me standing right next to S.A. seeing and hearing all of it and says:

Jane: Nice to meet you….

I laughed pretty hard then, not because I was trying to be “that” guy, (ya know peeing on my territory….) but because it was funny. Everybody else laughed to, and I think it caught him a little off guard….

S.A.: Oh, (imagine the size difference…him sitting in the chair, looking up at 6’5” of me standing beside him) were you sitting here?

Upon reflection, I don’t think this was meant as a personal jab, but more of a play on the fact that he’s small and I’m….big. But in the moment, I just blurted:

ME: So are you calling me fat? (no, I wasn’t offended or serious…we were all still laughing)

R.L.: Wow, now you can tell everyone that you got in a fight with Sean Astin….

Aside: Janer at this point says: “He’s not Amish he’s Mormon.” And S.A. replies: “I know, I just thought Amish would be funnier.”

At this point everyone is laughing and it kinda dissolves into jokes about Tolkien Fan Clubs and eventually S.A. has to meet some important types and the Janer and I depart.

Before we leave Sean gives us each a good-bye nod and a “nice to meet you.”

And so, dear Emily, what do you think of that one? I mean how am I going to ever out-do that encounter? And also, what would've YOU retorted to the "what are you doing here?" line?