Dee, when your allergies act up, take out your nose ring. 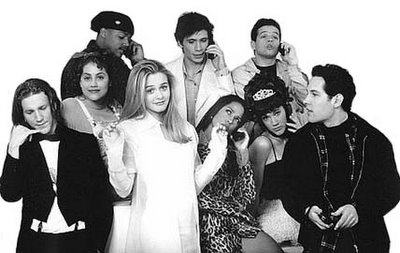 Thanks to hot mama Senorita Azucar, Lucy and I watched Clueless last night and laughed our nail polish off. When I first viewed that film I was a recent graduate of high school and obsessively drove around in my mother's Audi convertible. I thought I was Cher for sure.
Disappointingly though, Paul Rudd doesn't have that Baldwinism that he used to, and I have Phoebe Buffay to thank for that. Phoebe Buffay was never my type of weirdo.
Ok earlier I said, and I quote myself here, "I was Cher for sure." But...well...I didn't wear clothes that made me look like a teenage hooker and there was no knee high socks workin' it in my closet. But the sending chocolates and flowers to myself to pique other male's interest, that was totally me.

I did a whole lot of make-overs too. I gave a way clothes, shoes and make-up tips to strengthen another's shot at popularity and general well-being. And it never failed to back fire. The girls I helped become the girlfriend of the seasonal jock needed me no longer, and I was thrust out of their juicy details, until I found another project. That also happened to Cher.
I guess when I watch Clueless I heal that high school me, just a little. Because in the end, Cher catches Miss Geist's wedding bouquet and kisses her ex step-brother who is no longer a Baldwin. I'd like to think that I am living a happy ending as well. No more make-over projects for me. Although, my fingers do get itchy now and then, mostly when I run into the Phoebe Buffay types.
Email Post