Tom Cruise Has Nothing On Sophie Scholl 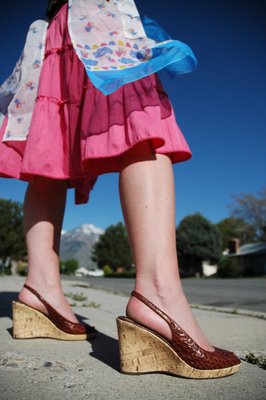 In a bizarre twist of my so called life where I get everything I want except the ONE thing I want, I found these shoes on Monday afternoon.
The Professor (whom I am calling Chupacabra because of a fascinating conversation) did not like these shoes when I glamorously introduced him to the pair via my spazzy fingers. When I tried them on, Chupa loudly blurted out,

"You must have those!"

"I know Chupa!"
I exclaimed back.

I went to work 9:16 sharp on Monday morning and like an original boomerang from Austria (Austria, right?) I came right back home. Somepingbody made a mistake and I was not needed. Chupa and spent the day shopping in Salt Lake City (you know, the home of the 2002 Olympics!) We shopped around and bought this: 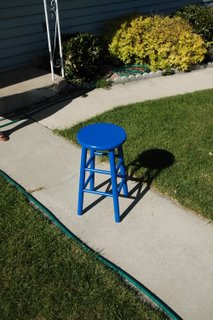 Except it was Chupa who painted it Pepsi blue! Don't you want one?

Aren't you jonseing for a Pepsi blue kitchen bar stool?

So really, like anyone wants to read my whole account of my day in SLC (2002 Spirit Within) but I have to tell you that we went to this movie called Sophie Scholl which was recommended by The Council Woman who, through some bizarre twist of fate came to know...anyway, we went to the movie.

Chupa and I love the Broadway theater in SLC (2002 Mitt Romney) because we buy Ritter Sports and watch films for intelligent patrons. Like, I saw MI3 in some commercial theater the day it came out and we knew the bad guy was Alskdfjlsk (code name) all along. Cause hello! We did time as an Alias fans, Mr. JJ Unoriginal Abrams. Tom was just Sidney with a short wig and a yguuggyys (code name for new, imaginary and yet fancy technology).

I can't recommend Sophie Scholl as a movie to watch on a day where you spent a lot of time and money on new shoes and kitchen bar stools that you will paint Pepsi blue shortly after the purchase. It will make you feel really, really silly.

Like mid-way during the movie you look down and see that the wood it took to make your shoes could be heat for some family living in the bush hiding from a dictatorship of the nastiest variety.

The movie is about Sophie Scholl, her brother and others who started the White Rose, an anti-Hitler group that wrote and distributed pamphlets about the horrors. She is caught and beheaded (that is not a spoiler folks, that's history!)

I spent the rest of the day loathing my easy life. How do I know if I am a hero? Or would be a hero if herodom presented itself? Maybe I need to pick a cause.

Have you tried the Choxie Chocolates at Target? Mmmmmmmmm. Good stuff.