The Time for the Birds and the Bees 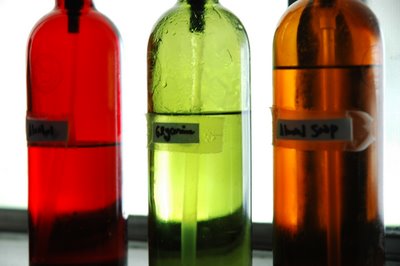 Yesterday I was lying out in the sun on my blanket, like usual.

Yeah and I was just there and Ralphy was licking the insides of my ears and whispering on and on about how lovely I am and whatnot (later that day we saw him jumping on Duchess, and you know what that means--he's in The Mood lately which is weird but natural--I guess.) The Prof was working on his motorcycle and making it faster and better than anyone else's motorcyles and that includes your grandfather's. The Chuch was chained to her dog run--I certainly can't have two dogs licking my nostrils--I mean maybe I could but--no tanks.

Having the sun beat down on my skin and roast it medium well makes me one happy woman. Yesterday I was thinking about my fantasy of living in the dusty desert and all that, when a thought popped into my head not, unlike the popping popcorn tree in the back of our yard:

I must take glycerin out into the desert with me.

My Grandmother's third husband Earl had an obsession with the thick, clear, slow-moving liquid of miracles and he pseudo-genetically passed it down to me. A bottle must be in the house at all times or else I eat more than my share of Zesta saltines (which come from the devil's bakery, so gross and yet...) and I stay up late watching Michael Douglass movies where he thinks he is secksy but he is not.

Do you want to hear a story about that? I was helping a table of fifth grade boys yesterday draw posters about their respective personalities. Thinking that they were 25 or something, they wrote this:

Call me for a good time!

My friends call me secksy!

I decided to put them in their places so I asked them what sexy meant. I did it all genuine-like, as if my husband doesn't ever call me such a word (except of course I know what that word means--it being practically my middle name and all...) and so can you imagine how awkward it was for them to try and explain it. I asked one of them to read me the definition from their "Children's Dictionary For Intelligent Words" and he was shaking in his boots! I was fired up with righetous indignation! I was tearing down these potential objectifying men of the future. And then one of them pipes up and says,

"I know something you don't know about Mrs. K."

To which the boys all stopped, jaw dropped, ears perked.

"She had a staff infection in her bum."

To which the boys exclaimed, cheered and gave each other super high fives.

Yeah, well I don't even know what a staff infection in your bum means.

And if I did have one I wouldn't have shared such a confidences with a fifth grade boy.

Hey come here kid, I've got something to tell ya.

But also, even if I knew what a staff infection in my bum meant I would have applied some glycerin and it would've been gone the next hour.

Then I could go back to being secksy and all.
Email Post