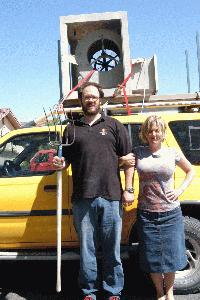 Chupa and I secretly stole away to Idaho this weekend. Idaho really gets me. Fries on front lawns instead of grass. Potatoes instead of pillows. Tots in your sherry instead of ice cubes. I love drinking sherrys!

The bishop of Chupa's homeward asked him to come and give a tribute to his mother for their Mother's Day Sacrament Meeting. Secretly though, I think he wanted Chupa because he does the stick pull with Joseph Smith in the new movie.

After the meeting was over there was a line out the foyer for autographs.

"Will you sign the back of my program?" asked the little girl who so sweetly sang "I Often Go Walking" in the Chorus of Primary Angels.

Chupa was asked to speak right along with two other children of ward mothers. Incidentally, one was Chupa's babysitter on whom he had a long-lasting crush since the sitting started. So what did Chupa do? He went with it,

And oh the laughs!

Needless to say I took 2 Mother's Day gifts. They were dipped pretzels.

Guess whose favorite treat is the dipped pretzels?

Chup's (for short) mother Honey cried and cried. It was really sweet. Chup really loves his mom. (At least that is what his tattoo says.) Honey is the most nurturing woman I have ever met. She bought me white pearls for my birthday and when she found out that I already own a pair she bought me black ones. They were sitting in a white jewelry box on the coffee table when arrived in Idaho. I love her too.

After the meeting we went to a mother's day brunch where we dined on potato salad, potato lemonade and whipped potato cream on the strawberry cake.