Impressions and Things I Won't Do On Expeditions

Norma signed me up to take students on an expedition to Goblin Valley. I just heard today that the showers and running water will not be available this year due to the BLM's construction on our campsite. Transportable toilets will be our common lot. We leave first thing tomorrow.
The BLM obviously haven't tried to have a BM in an porta potty, or else they would've solved this problem during November when Goblin Valley is a wasteland!
Anyhow, I am NOT going to use those porta potties.
NOT me!
Gross.
Say what you will.
One time, on the 4th of July parade down Center Street, I had to use the neighborhood porta potty because I had like 25 snow cones and I anyway, I walked in on a lady. She was wearing her obligatory Old Navy flag shirt and navy flip flops. I might have ruined her 4th of July. To her it will always be the 4th of July when somebody walked in on her using the porta potty.
What?
You wanted to see a picture of me and The Professor at the Grand Canyon?
Ok 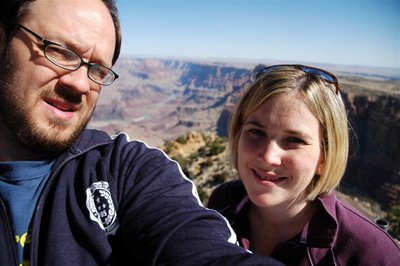 Sadly, the Grand Canyon did NOT impress me like I wanted it to. I was like, Oh yes. I see. A big Lake Powell without the lake and 4 times bigger. So what. Let's go look at over priced turquoise earrings.
Like I said to the Professor, I grew up around red rocks, deep gorges, mesas and desert. The Grand Canyon was more of an extension of that.
(And that is my philosophy on the Grand Canyon as it pertains to me.)
But the other tourists were going on and on about it!
Especially the ones from New York.
Which made me equally sad because when I went to see the Statue of Liberty I was deeply disappointed. So I couldn't say, Yeah, we've got the Grand Canyon but you've got that fantastic Lady Liberty!
What am I talking about?
(I think I am hard to please.)
If someone invented a sound/smell-proof porta potty I might be amazed.

Amazed. But I still wouldn't use it.