* The Pirate et Moi at our Closing Ceremonies Gala -a party of two.
The Council Woman called me yesterday to ask if I was alright.
"Sure, I'm fine, why?" I asked.
"Well, you haven't written on your blog in a couple days. I started to worry."
So it's nice to know that if I were to internally combust into a little pill of ash that someone would know in a matter of days...when my blog hadn't been updated. I mean, if I were to be kidnapped (womanapped?) the Amber alert would be sounded on the 5th day of no postings, after my mom calls to suggest that I update my blog. Really, if I were to have sickle cell anemia it wouldn't be long before...
I got some bad news this weekend.
1.) Christopher is leaving me for two weeks. Which is fine. But not really fine because Hello! He is going to miss my big birthday! 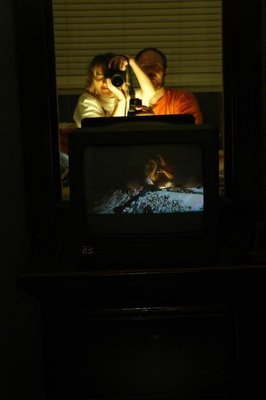 2.) The Olympics are over. Back to life. Facing my fears and all that jazz.
At least I have some new shows to watch, like Wendy Sue commented on, CONVICTIONS! Did you know that the average age of a New York prosecutor is 28? I am 28! Well, until next Saturday. But who cares about that? Who cares will be out of town.
Who Cares is a BIG SHOT IN RUSSIA!
So anyway, I decided to have my own personal Olympics. For instance, Brushing My Teeth. If I do it really well, I give myself a gold medal.
I got a bronze in Sitting In Church today. I would have earned a gold but my buttocks hate those foldy chairs. I had to stand during the Touch Down Curtis Brown fireside. I don't think my heart was in it. I was thinking about The Pirate and who is going to change The Chuch's bandages while he is gone? Not me!
I did not medal in Changing The Chuch's Bloody Bandages.
I was in the club house for letting Ralphy Sniff My Chest. At the last minute, I started to think, this is really weird. Why do dogs like to do these strange things?
I was out of the club house after that.
Gold in Hair Curling.
Silver in Eating Christopher's Yaki Soba -I would have gotten a gold, but I fumbled with my chopsticks a couple times.
I totally Bode Millered Staying Cool After Church though. I really tried to not get all crazy after church, because it's like a bewitching hour for me. On any given Sunday I come home and run around and jump on the bed and couches and eat everything in sight. Today I came home and started out OK but then I lost my control. I started belting "Oh Canada!" and no, I don't know how to sing it in French. Why does everyone ask me that?
Gold in Making CK Laugh Even Though I Wasn't Trying.
Gold in Laughing At CK.
I Jacobellised Trying To Meet Curtis Brown after the fireside. I was all "showboating" when I walked up to him and introduced myself as the little sister of Coach C. Then I got nervous because Curtis Brown is a hero, and one thing I've learned from watching the Olympics is that Super Heros have a secret identity!
Silver in Waffle Making.
Silver in Drinking Bro. K's Homemade Rootbeer!
Gold in Having A Pretty Darn Good Life.

I'd also like to say, Vance, I am glad that you are still with us! After this you get an honorary Gold Medal at the Cjane's Olympics. (Huge Honor. Really Huge.)
Email Post