Cause Baby, You Are Always A Gold In My Book Oh great the Olympics are here.
Cancel all my appointments! Call in substitutes! Reschedule my weekly pedicure!
CK put a t.v. in my room for Olympic watching convenience. It's mostly for my illness. My illness is some sort of circulation problem where my feet feel like frozen particles of subatomic matter mostly all of the time. Thick socks, under 4 layers of blankets and a heating pad will usually thaw them. (I almost wrote "dethaw them" and what is the use in that phrase? I will answer - NOTHING.)
The backstories! The heart breaks turned gold! The controversies!
I can't miss a minute of it, no not one.
Didn't you see those people with bubbles on their head last night? And the birth of Venus! Right there on the screen for all to see....and Nessun Dorma sung by Pavarotti.
Side note: I always thought that Pavarotti was the Ziploc® guy growing up.
My friend Wendal was an escort for important people during the Olympics in Salt Lake. They picked her for this job because she skis better than anyone's boyfriend. (And that includes yours.) The thinking was, obviously, that she could take the executives skiing and show them how the Greatest Snow On Earth was worth their investment. Wendal was paired up with Mr. Marriott of Mr. Marriott's Happy Hotel Conglomerate. When all was said and done, he handed her a check worth a lot of bones and told her to get a new bike. A nice bike. A real, real nice bike.
My kids will someday ask what I did for the Olympics -as in, did I volunteer? And I will answer "No honey because I was dating your father at the time and let me tell you that was an Olympic sport all on it's own." Every night K-Ked would come over and watch all the coverage with me and my Chere Care who would bake fantastic cookies. The kind of cookies that would cause someone to rip their clothes off and jump off large buildings. Perhaps it was Chere Care who kept K-Ked around and not my womanly charms as I had always assumed. Well, I've learned my lesson about assuming (ass out of you and me...don't make me spell it out for you!)
But I created the first ever Zagi Olympics (see exhibit A). That should count for something, really. 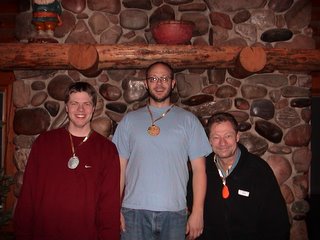 Last night I was watching that part where Yoko Ono (let me be your Yoko Ono) introduced Peter Gabriel, who, when he popped out of the ground started singing "Imagine" like he was Satan, and after that it cut to a commercial.
That is when I saw him.
No, not Bode Miller.
No, not Darek Para (Home Depot).
No, not Laura Bush.
This guy, with LaVell Edwards. Some bank. I can't remember the details really. But I started yelling to K-Ked in the next room who was playing some more-important-than-watching-history racing game with M.D. via the world wide web."Come Quick! Tell me who this gorgeously handsome guy is -I know I have seen him before on E.R. or something!"
And K-Ked ran in the room and was like. "Oh. That's me."
I swear, if that keeps happening I should have tests done.
But anyway, happy Olympics everyone!


P.S. Who was that Ziploc® guy anway? The fat singing chef. You know?
Email Post