The first year of Christmas in Idaho it was Zagis, the worlds smartest styrofoam radio controlled airplane. Christopher, M.D. and my father-in-law Ringo all got them for Christmas. I stood out in the muddy fields watching them crash, pick up scattered parts, cry and laugh.
I was bored to death.
And very cold.
Christmas 2 there was a radio controlled helicopter obsession. M.D. and Ringo consoled Christopher when he crashed it, cockpit first, into the neglected satlelite dish on the side of the house.
I saw it happen from inside.
$1000, nice to meet you, and good-bye.
Christmas 3 we all pitched in on CK's Nikon D-70. Ringo was already a snap master with his Nikon D-100 and M.D. equally infatuated with his Fuji S-600. When the boys got out their cameras the rest of us ran (and as you know, I don't shy away from cameras).
He tried to get me into the whole photography art.
I just didn't get it, the shutter speed stuff (what? what?)
But this year M.D. got "Guitar Hero" for the Play Station (what the kids are playing these days).
We have a winner.
Power ballads and classic rock=fun for the whole family. 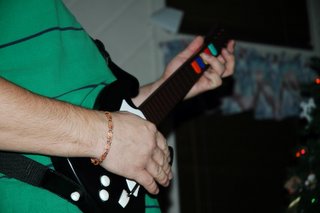 Christopher likes to rock out, over and over again to "Ziggy Star Dust" by David Bowie. I wouldn't mind if he were to rock out with the same tights that David Bowie wears in the most fantastical movie ever made, "Labyrinth".
Lyrics in the song "When the kids had killed the man I had to break up the band" makes us all stop and think about what life must be like for a real rock star (rough). 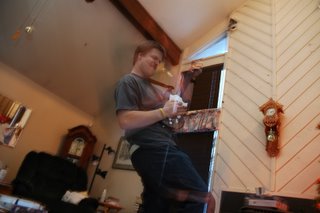 M.D. likes to rock out to the Boston's tribute to love sickness, "More Than A Feeling". I think because he just slams the guitar solo like it's nobody's business. Like Christopher says "He just took my girlfriend out to lunch."

I asked M.D. if he has seen "his Marianne walking away." But he said "No" because he is clearly married to Kentucky. 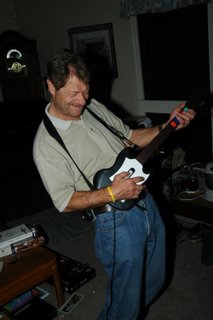 Ringo likes to "put a little dime in the juxbox baby" with "I Love Rock and Roll." During one riff he yelled, "That just feels so good!" 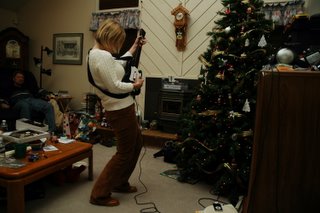 But for me the choice is clear. "Killer Queen" by Queen.

"Guaranteed to blow your mind".

CK says that I sway like the girls in Robert Palmer's "Simply Irresistable" video. That was until I held my guitar sideways and did my BAM! kick. 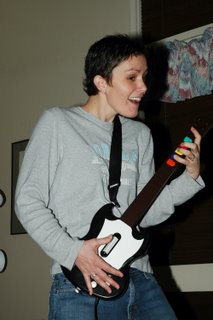 Kentucky, as always, is really much better than any of us (the girl has talent), she shreds it like it was the cure for cancer. 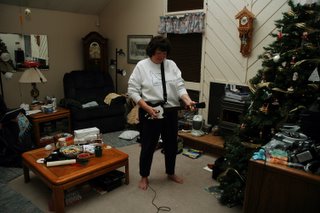 And my mother-in-law Honey even picked up the ax and showed it who it's mother was.

Tip: It's very important to know what your mouth is doing during your performance. Is your tongue dangling out? Are you biting your lower lip? Is your jaw hanging open? Are you making squirmy faces, especially during high notes? I mean the crowd is watching! I just try and keep a straight face, except for when I am winking at my one special groupie (Christopher).

Ahh but we'll always remember that fun Christmas of 2005 with the tender memories of Megadeath, Black Sabbath and a that rocking solo on ZZ Top's "Sharp Dressed Man".

Coz every girl crazy 'bout a sharp dressed man. BAM!