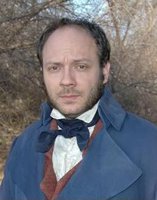 The new Joseph Smith moving now showing at the Legacy Theater in the Joseph Smith Memorial Building is yet another show where I watch my husband on his death bed. Dying or being the villain -that is my husband's career.

(I won't leave you hanging -he does both in this film.)

Except, the good news is that in this movie he gets to do the stick pull with Joseph Smith.

At the premiere last night L. Tom Perry asked the spouses to stand up and be recognized. My friend was all "stand up!" because I never stand up for things like that, why should I? What did I do? I just feel silly. So I didn't. Besides, I was sitting pretty close to the podium and if me and my bright orange shirt were to stand up, Elder Perry would have to look directly at me. And yesterday was a day where I just didn't need that kind of attention. Not from an apostle. No.

(I won't leave you hanging -some swear words were said earlier that day. It's The Chuch's fault. I just love her.)

But about mid-way through the movie, seeing gorgeous shots of middle and eastern America I remembered that my husband left me for a month to shoot this movie, not to mention days and days on set here in Utah. I remembered how lonely it was to have him gone. I recalled visiting him on set, sneaking some pirouettes from the crafty table, and kissing him a quick hello and good-bye.

Then, I got the urge to stand up because, indeed, I owned a little bit of this movie.
Which is when my husband came on the screen, sweaty on his death bed, in a mosquito ridden pre-organized Nauvoo, and confesses to Joseph,

"My pride has brought me low."

(Then, I thought about those swear words and all.)

Why do I have to be married to such a fine actor?
Email Post