The Night DJ Crizzy Snick Snick Tried To Pick Up On Me... 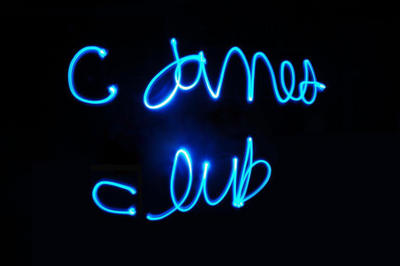 Okay so I don't get it. Do young, hip couples really go to dance clubs together? I saw Kevin Bacon do it with his wife in She's Having A Baby. In addition, from when I used to read the Entertainment Page on MSN (see that? it's a new leaf) couples like Ashton and Demi go to clubs all the time. I would ask my friends if they go clubbing on date night, but I am pretty sure it's just a trip to Brick Oven and maybe a dollar movie. Elsewhere couple clubbing seems to be the rage. So should Christopher and I be at the Omni tonight?
Here's the deal, I have gone to dance clubs for serious before. It started with The Palace on 9th East in junior high. I have also, in singlehood, gone to Bricks, DV8 and The Bay. Not to mention a few in Europe that I have since repented of. Clubbing for me was all about picking up/being picked up upon. So if I've already been picked then why would I go back to the old cherry tree?
The answer is that I don't.... or we don't.
Unless you count Cjane's Club which is located in the most west end of my dining room. Cjane's Club is only big enough for one person (me) and then there is staring room from the French Doors that go out to the porch (Ralphy). Our stereo pumps so hard our new laminate barely stays put. Here are the albums that the DJane (Me) likes to spin:
Anything Yaz
Anything Moorcheeba
Whoa Nelly!
Laundry Service-Shakira
Geometroid-Looper
At times, Cjane's Club is a smoky joint over looking the bay in San Francisco. That is when I sing instead of dance. Here are some of the albums I sing and yes I have a microphone and yes it is a real microphone and yes our neighbors are glad we moved from our condo:
Anything Old Skool David Gray
O-Damien Rice
Come Away With Me -Norah Jones
Anything Yaz
I have to say it, though I hate to say it, but Celine Dion Let's Talk About Love & S'il Suffisait D'aimer. Belt away.
Also if I couldn't have Whitney Houston's voice I would have Joan Osbourne's but I wouldn't sing any of her trashy muzic. And the next time my brother Steve asks what three albums I would have on a deserted island I am going to say:
Flesh-David Gray
Crash-DMB
Fumbling Towards Ecstasy- Sarah Mclaughlin (back when she ROCKED!!!)
Basically, the drawbacks to CJane's Club is that sometimes Christopher walks in while I am dancing and he scares the pants off of me. Because who, who, dances or sings with their eyes open?
Sometimes I get invited to the VIP room at CJane's Club a la DJ Crizzy Snick Snick (his office). I get to choose the music and thanks to Kazaa it can be any song ever written. Here are some of the songs I have requested:
Joey-Concrete Blonde
Clint Eastwood-Gorrillaz
All These Things That I've Done-The Killers
You Needed Me-Anne Murray
The Divorce Song -Liz Phair (back when she really ROCKED!!!)
Tonight I was at the club and Crizzy spun an old classic "Midnight" from Yaz and we danced/sang the whole album long. Now I weigh exactly three pounds lighter. Maybe thin enough to fit in my clubbing pants of yore.
Yore Mama!
Email Post