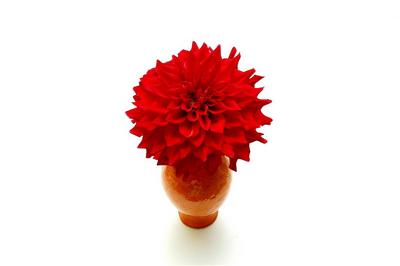 I've always had problems with statements that involve "dreams coming true." First of all, if my dreams came true I'd be forever half-naked and anxious because it's the end of the semester and I only went to class twice. Also my teeth would be falling out.
But really, the cold hard fact is that dreams don't come true. Not in the way we have dreamt them to come true. I wanted to be married and pregnant a year out of high school. DID NOT COME TO FRUITION. I wanted to be a tough beat journalist. NOTHING DOING. I wanted to sing in Jazz clubs in San Fran. I NEVER EVEN GOT CLOSE. So don't talk to me about dreams coming true, and don't sing that song "I Believe I Can Fly" because so did Dumbo and he was nothing but a circus act.
When you realize that there is indeed a higher power in the plans of your existence is there a need for dreams? Once you've handed your will over to God isn't he in charge? Being a saint can insure you fulfilled expectations in the life to come, but this one is only a test. Certainly I can talk dreams all I want while I am praying, but there is always a little bit of disappointment after I say Amen.
That's not what you had in store for me is it? I question looking upwards.
Ahhh but sometimes he meets you half way... 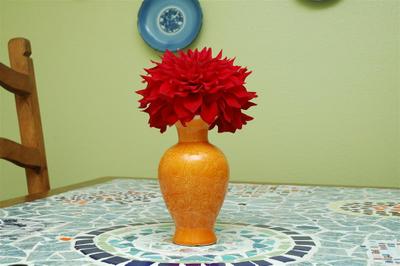 Four years ago at this time I was in love with Christopher and I wanted to marry him more than anything I had ever wanted. At night, walking around the temple I'd think about our life together. I'd get so excited that a lump would develop in my throat. It really felt like a lump that might turn into singing praises if I ever let it past my tonsils. I am imagining me walking around the temple, past the engaging zoobies, singing High On A Mountain Top. That's the way it felt.
In my head there was this dream of us buying my Grandmother's downtown Provo home. It was yellow and had a big front porch with a little backyard. In my dream, it was October, and big dinner plate dahlias lined the perimeter of the backyard. Our garden had grown like our love and there wasn't a room in our house without a vase of the gorgeously fat flowers. There, in the backyard, we'd have a small table where we could have dinner amongst the dalhlas. So beautiful, so perfect.
In real life it happened more like this... 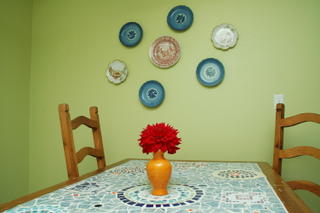 Eventually we did get married and did buy a house. It wasn't my Grandmother's historic yellow home, rather a near double wide blocks from the freeway. My in-laws bought me a table for the backyard but having dinner out there is a lesson in dog swatting. It's October and there are two pink roses blooming by the fir bushes.
But this morning I cut a dahlia from my frontyard flower box. It's only the second one of the season and it's not dinner plate sized. I put it in a vase in the front room. It reminded me of four years ago and how giving up my will eventually leads to little blessings. Or, in a round about way I guess, dreams coming true.
Email Post